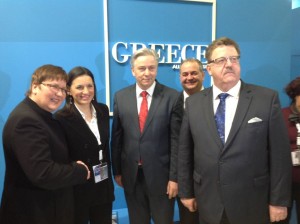 An agreement for the development of health tourism for the elderly and people who need care while on holiday was signed on 5 March between Greek Tourism Minister Olga Kefalogianni and German Federal Deputy Labor Minister Hans-Joachim Fuchtel (who is also the appointed special envoy to promote Greek-German cooperation on a local administration level).

The Greek-German agreement was signed on the sidelines of the first day of the international tourism exhibition ITB in Berlin.

Referring to the agreement, Mrs. Kefalogianni said the Greek Tourism Ministry would take the necessary steps so tourists in need of care while visiting Greece would have better access to hotels and other tourism services.

Although specific details were not released, this Greek-German cooperation is expected to create jobs in various sectors and provide employment opportunities outside the tourism season. The program will begin this month on the Greek island of Rhodes.

Discussions between the Greek tourism minister and Mr. Fuchtel also focused on connecting tourism education and training with the labor market through the dual vocational education system that combines classroom and business, theory and practice, learning and working.

In Berlin, Mrs. Kefalogianni also met with German Deputy Minister for SMEs and Tourism Iris Gleiche and the Mayor of Berlin Klaus Wowereit.

All discussions focused on Greek-German cooperation in tourism, attracting investment and exchanging know-how.