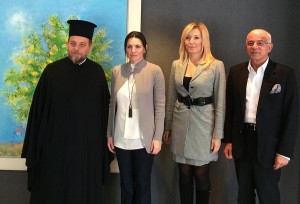 His Eminence Metropolitan Cyril of Rhodes of the Metropolises of the Dodecanese of the Ecumenical Patriarchate, Greek Tourism Minister Olga Kefalogianni, Region of South Aegean Vice Governor Eleftheria Ftaklaki and Secretary General of the Tourism Ministry Anastasios Liaskos.

The aim of the protocol is to promote the region’s top religious monuments and establish the Dodecanese as an important religious destination in the country.

When discussing ways to boost religious tourism in the Dodecanese, the publication of a Russian tourist guide on the region’s religious monuments was suggested. Russia is a market with an increased interest in religious tourism.

It is reminded that the tourism ministry has already signed cooperation protocols with the Greek Church and the Church of Crete.

The ministry seeks to extend the country’s tourism season through the development of religious tourism.

Austrian Experts Give Greece A Lesson On Winter Tourism