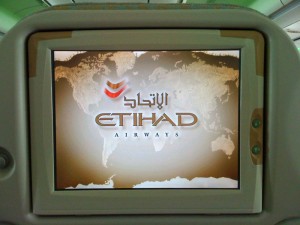 Etihad Airways, the national airline of the United Arab Emirates, has transformed in-flight entertainment options with the introduction of eight live television channels that broadcast live news and sport.

The new live channels available are BBC World News, BBC Arabic, euronews and Sport 24. CNBC, Japan’s NHK World Premium, and CNN, will be introduced during November; and Sky News Arabia will follow in the coming months.

In addition to the Formula 1, passengers can also watch a wealth of live top sporting action this November including the ATP World Tour Finals, English Premier League and German Bundesliga matches, and Euroleague Basketball.

The major sports coverage continues in 2014 and includes the Australian Open, French Open and US Open tennis championships, the Winter Olympics, the Masters from Augusta and Ryder Cup golf, and the FIFA World Cup from Brazil.

Smartphones And Other Electronic Devices To Be Allowed On-Board Aircraft