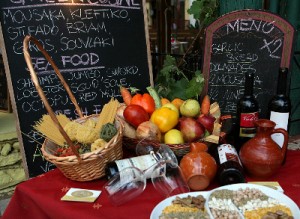 The price of wining and dining out in Greece is expected to fall as the value added tax (VAT) reduction in the food service sector from 23 percent to 13 percent comes into effect on 1 August.

Greek restaurants, cafes and bars that pass the VAT reduction directly to their customers will be given an official sticker of certification to post on their windows so the public is informed, it was announced 26 July.

The agreement is based on a model that was successfully implemented in France in 2009 when the VAT rate in the food service sector was reduced from 19.6 percent to 5.5 percent.

French restaurateurs and cafe/bar owners who lowered their prices were rewarded with an official sticker on their window that read “A cut in VAT is a cut in prices!” (see photo).

Commenting on the signed agreement, Tourism Minister Olga Kefalogianni said the Government will monitor if the VAT reduction is passed on to customers. She underlined that professionals of the food sector must rise to the occasion and issue receipts along with lowering their prices.

“Customers must also ask for receipts as well and reward the businesses that actually reduce their prices,” Mrs. Kefalogianni said.

The tourism minister added that if the measure becomes permanent it can help strengthen the competitiveness of the tourism package.

The VAT cut in the Greek food service sector will initially run for four to six months, until it becomes clear to the Government if it boosts consumer spending and tackles tax evasion. For results to be shown, restaurateurs and cafe/bar owners must lower their prices and issue receipts regularly.