Delphic Games To Be Held In Greece This Year 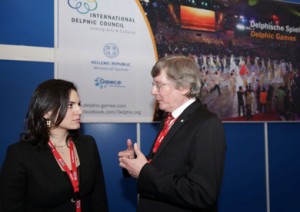 Arts and cultures from all over the world will meet in Delphi this year to hold the IV Delphic Games as the Greek Tourism Ministry has given its official support.

“It’s one of the best messages Greece can convey to the world this year that the Delphic Games arrived to where they were born,” the Greek Tourism Minister Olga Kefalogianni said during talks with IDC Secretary General J. Christian B. Kirsch at this year’s ITB Berlin trade show.

The IV Delphic Games 2013 will be held 23-28 September in Delphi. The region includes villages and cities such as Amfissa, Itea, Parnassos, Hrisso, Arachova and Galaxidi.

According to reports, the tourism minister expects the Delphic Games “to promote arts and cultures from all over the world, with a view to strengthen Greece’s identity inside and outside the country.”

“Greece is the cradle of civilization and this is why it is so important for us to be hosting the Delphic Games this year,” she said.