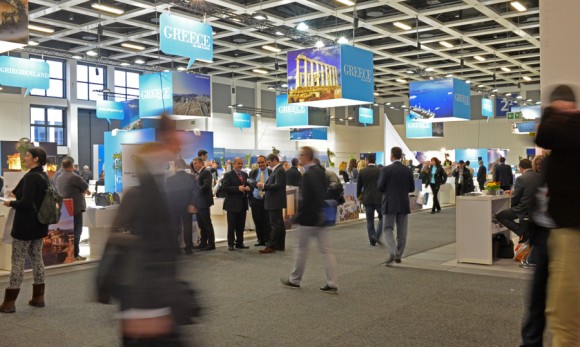 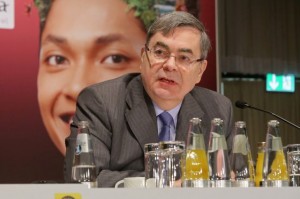 “We expect this year’s ITB to again set the tone for a successful year in tourism by stimulating further growth in this sector… Travel destinations that are traditionally popular among Germans will benefit especially, among them Greece, which has good chances of celebrating a comeback,” Jürgen Büchy, president of the German Travel Association (DRV), said during the ITB Berlin trade show that took place 6-10 March 2013 at Messe Berlin.

And it would seem that Mr. Büchy is right as, according to travel industry executives: “Greek tourism is making a comeback this year.”

Last year, German arrivals fell by 5.9 percent to 2.1 million. However, according to the latest figures, a 15 percent increase in arrivals from Germany to Greece is expected this season. 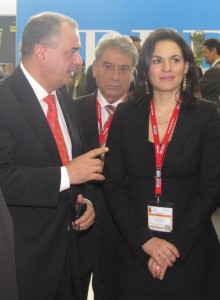 Oh her part, Greek Tourism Minister Olga Kefalogianni said the ITB Berlin exhibition showed a positive image for Greece. “This confirms our predictions that 2013 will be a good year for Greek tourism,” she said. (For more of the tourism minister’s statements, press here.)

The tourism minister did not give a press conference to the media at at Messe Berlin but instead spoke at an event entitled “Greece on the path of development. Extraversion-tourism-investment” organized by the Konrad Adenauer Foundation and the Greek National Tourism Organization (GNTO). Selected members of the German media were invited to the event. 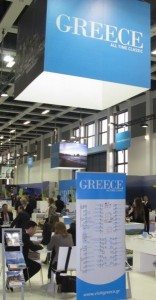 Although Greece participated in ITB with a smaller stand compared to other years, the country’s presence certainly did not go unnoticed.

The GNTO stand this year hosted 48 Greek tourism enterprises and regions. According to the ITB Exhibitor List 2013, a total of 77 Greek exhibitors attended the trade show.

The majority of Greek tourism professionals told GTP they felt optimistic for the 2013 tourism season and that a “change of heart” was apparent from the German side.

Greece was represented this year at ITB under the slogan “Greece, All time classic.” 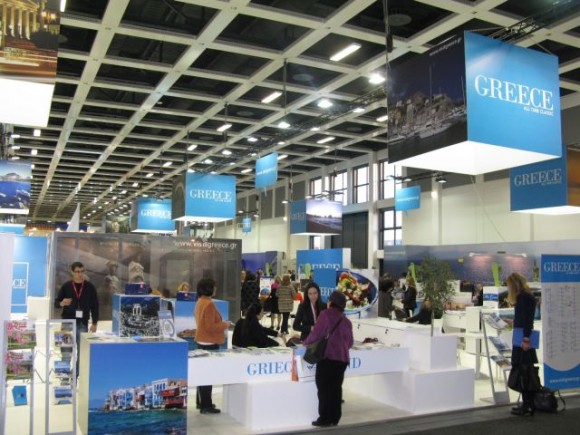 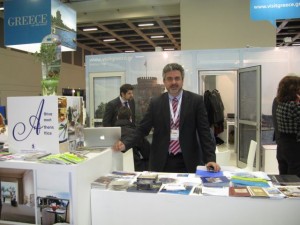 Once again the Athens-Attica & Argosaronic Hotel Association and the Athens Development and Destination Management Agency joined forces and participated in ITB with a joint stand. Athens Convention Bureau’s George Angelis was on call at the stand and promoted Athens to the German and other markets. 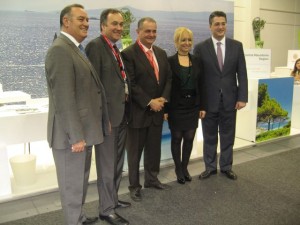 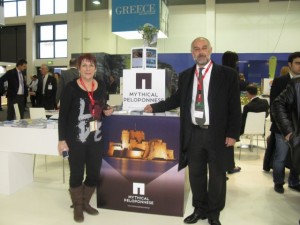 The Peloponnese shined at ITB Berlin last week as the region’s new promotional video won third place in the 2013 “Golden City Gate” awards in the “Countries and Regions” category. ITB Berlin was the first international event the Peloponnese region presented its new tourism brand “Mythical Peloponnese.” Pictured is Yiannis Sorovigkas, chairman of the Tourism Department of the Chamber of Argolida with Katerina Demestiha, manager of Demestihas Studios in Gythio. 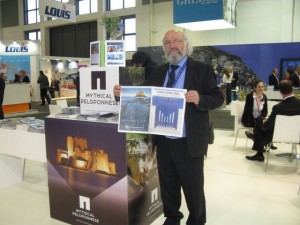 Peloponnese Region – Theo Konstantinidis of Eurogat (catering equipment and products) did his part for the promotion of Greece in Germany. For the second time, Mr. Konstantinidis produced a total of 30,000 copies of the newspaper “Griechenland 2013 – Inspirierende Momente” (Greece 2013 – Inspirational Moments) that was distributed throughout Greek enterprises in Germany and the ITB Berlin trade show. The initiative was based on personal funds. 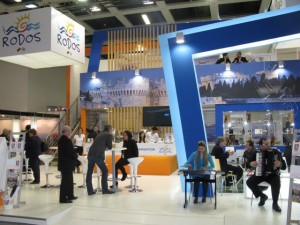 The Rhodes stand was one of the busiest and liveliest stands at this year’s ITB. According to Charalampos Palogiannidis, general manager of the Rhodos Tourism Promotional Organization PROTOUR, the situation has reversed for Greece compared to last year as the German market was showing a high interest to the country. “Now we expect this turnaround to translate into bookings,” he told GTP. As of the June, Italian cruise ship MSC will launch cruise itineraries from the port of Rhodes. Cruise company Disney has expressed similar interest for 2014. 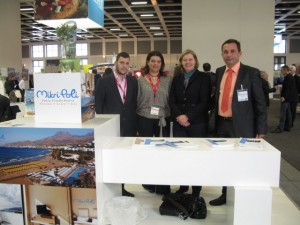 The stand of Mikri Poli Crete of Sentido Hotel and Resorts. The family hotel, set on a sea facing slope with direct access to golden sandy beach, is highly popular in the Scandinavian market. According to Dimitris Papassarandis, Mikri Poli resort manager (first from right), bookings at the hotel this year are expected to move on the same pace as the previous year. “In Crete we didn’t have a drop in bookings,” he told GTP. A new Sentido Mikri Poli hotel will open on Kos as of next month. 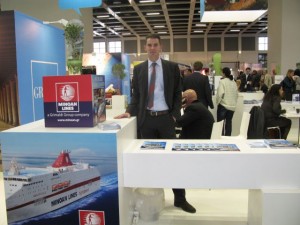 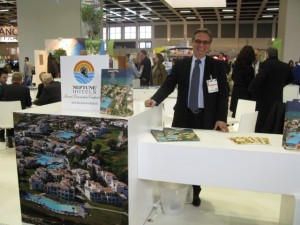 “Our bookings are moving this year on the level of 2011, which is a big improvement from last year,” said Dimitris Bisas, room division manager of Neptune Hotels on Kos. Mr. Bisas said the German market was showing a “mood for cooperation” at this year’s ITB. In regards to the Greek stand at the trade show, which was smaller this year, Mr. Bisas said it was more important if there was “high movement” at the stand. “That’s what counts,” he said. 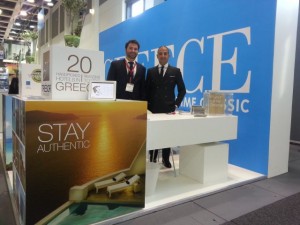 Trésor Hotels & Resorts – Panos Pantazopoulos, general manager and Ioannis Noni, commercial manager. According to Mr. Pantazopoulos, Tresor Hotels participated in ITB Berlin to strengthen its presence internationally through networking with German tour operators and media but also to reinforce the loyalty program, TClub, by attracting 5000 members. TClub members have access to special “experience packages” at the hotels of the chain. Trésor Hotels aims for 2013 to internationally expand its business in Italy, Turkey and Cyprus. 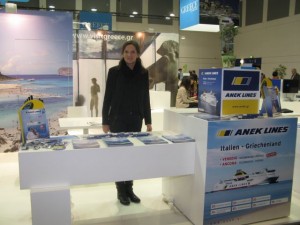 ANEK LINES area sales manager Germany, Switzerland and Austria, Dagmar Bleile. Once again, ANEK LINES participated in the ITB Berlin trade show and confirmed the company’s timeless strategy of having a strong presence in tourist markets abroad to highlight the quality and welcoming services of Greek tourism. Guests at ITB 2013 were informed on the dozens of routes ANEK serves to Greek island destinations and the company’s high level of onboard service. 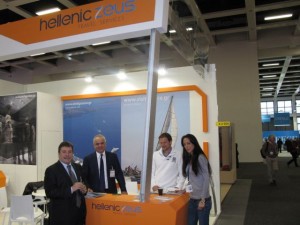 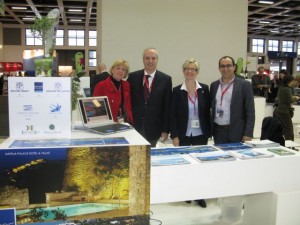 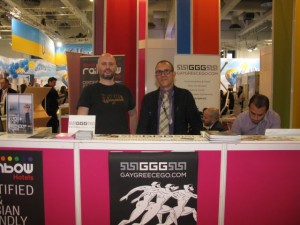 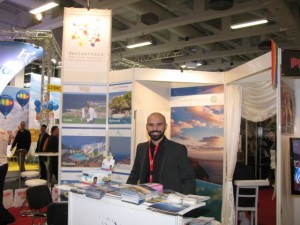 Nikos Morantis, CEO of destsetters.com of The Trendsetters by morantis.  destsetters.com was the second Greek company that promoted Greece as a hotspot to LGBT tourists. The destination development program, destsetters.com that specializes in the consumer characteristics of the LGBT community worldwide, represented and promoted over 30 gay friendly Greek hotels during this year’s ITB. Hotels that are in the destsetters program include the Mykonos Theoxenia on Mykonos, the Royal Blue Resort on Crete and the Esperos Village on Rhodes. 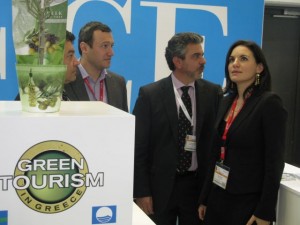 Greek Tourism Minister Olga Kefalogianni at the stand of “Green Tourism in Greece” of communication agency North Events. The Oslo-based agency distributed the “Green Tourism in Greece” publication at the ITB Berlin trade show. The publication is part of a campaign for green tourism in Greece that aims to present the accredited Green Key 2012 Greek hotels and Greek blue flag marinas to European countries. According to German Federal Deputy Labor Minister Hans-Joachim Fuchtel, such initiatives are extremely important and Greek businesses and organizations must continue efforts to promote sustainable green development in the tourism industry. 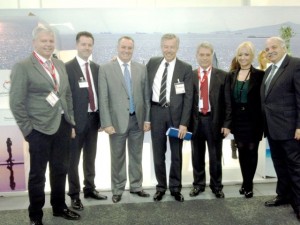 Halkidiki Tourism Organization – SETE President Andreas Andreadis (center) with the president of the Halkidiki Tourism Organization, Grigoris Tassios (second from left), and other tourism professionals. According to early bookings data provided by the organization, arrivals from the German market to Halkidiki appear to be on the up by some eight percent. Mr. Moutsis, contract manager of the REWE travel company, said already 8,500 airline reservations had been made to Thessaloniki this year on various German airline carriers. For the past five years, the German market is covered through regular flights and not charter flights. 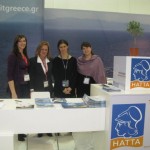 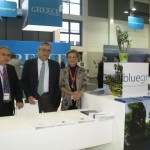 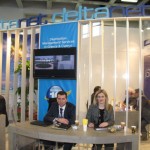 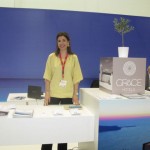 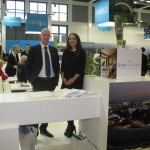 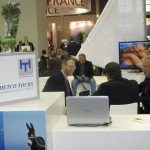 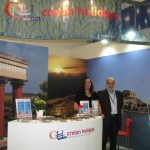