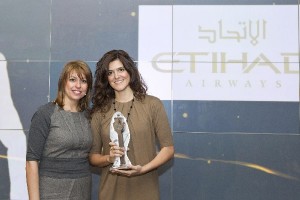 In its 13th year, the annual AIA workshop presents awards to airlines that have demonstrated rapid and successful development over the past 12 months. To see all the winners, press here.

More than 150 travel managers, human resource directors, facility managers, and travel buyers of medium and large companies involved in the Greek travel management field voted for the award, which was presented at an event held at the airport.

The award comes on top of other accolades recently bestowed on the airline, including: World s Best First Class, as judged by over 18 million air travelers worldwide in the annual Skytrax survey, and World’s Leading Airline for the fourth consecutive year at the World Travel Awards.

Etihad Airways launched daily flights from Athens to Abu Dhabi in June 2009 and since then has carried more than 300,000 passengers on that route.