“After 2000, Greek tourism was the only part of the private sector that created 60,000 new jobs, while in all other areas, except for certain public services, employment has dropped.” – Hellenic Chamber of Hotels 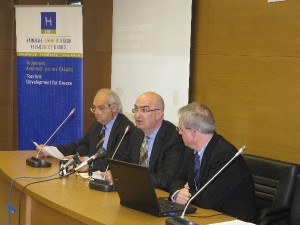 “This study helps highlight the employment opportunities that arise from the tourism sector,” the president of the Hellenic Chamber of Hotels, Yiorgos Tsakiris (center), said in regards to the study “Employment in the tourism sector,” conduscted by the Research Institute for Tourism (ITEP).

Although Greece saw lesser arrivals last year, Greek hotels retained their staff in 2012, according to the Research Institute for Tourism (ITEP).

At a press conference given today, Monday, 2 February, by the Hellenic Chamber of Hotels, ITEP’s latest study entitled “Employment in the tourism sector” was presented to journalists. The annual study was based on data provided by 1,200 hotel units this year.

According to ITEP, in 2012, total employment in Greek hotels recorded a marginal increase of 0.8 percent in August (peak season) compared with the same month of 2011 and amounted to 119,990 workers. (See table 1.)

On the other hand, overall hotel employment in May 2012 (beginning of tourism season) showed a decrease of 2.3 percent compared with the same period of 2011 and dropped to 92,100 workers.

This decline in the number of hotel employees was due to the fact that a sufficient number of units either did not operate at all or opened late during the season (see table 2).

Domestic tourism drop to blame
“Greek hotels would possibly have more workers if the dramatic fall in domestic tourism (due to the economic recession) had not been recorded,” the research institute said.

As highlighted in ITEP’s survey, this was noticed mainly in mountain destinations. 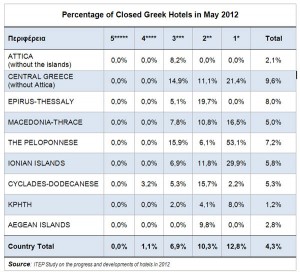 Lost job positions were recorded in regions that are frequented mainly by Greek visitors. An increase in employment positions was recorded in traditional destinations they mainly serve foreign tourists.

The largest decrease in employment positions was recorded in Epirus-Thessaly (-31.5 percent in May and -21.3 percent in August).

The Peloponnese followed as employment dropped by 16 percent while in Attica there was a decrease of 8.2 percent in August 2012.

ITEP noted that jobs in hotels in Attica had begun to steadily decrease since 2008.

In 2011, employment positions in Attica showed an “unnatural” 19.4 percent drop. The decrease continued last year as many hotels in Athens center had closed down.

On the other hand, the largest increase in employment during the 2011-2012 period (see table 1) was recorded in the Macedonia-Thrace region (11.4 percent) and Crete (9.9 percent). ITEP said this occurred since hotel capacity in Greece increased by some 3,000 rooms mainly in the above-mentioned regions in 2012.

Compared with 2011, the number of foreign workers decreased by 7.3 percent in May and 8.4 percent in August.

More studies to come
The “Employment in the tourism sector” study is the second of four studies conducted in 2012 by the Hellenic Chamber of Hotels.

The first study was in regards to the “Development of Medical Tourism in Greece” and was presented last November.

This Saturday, 9 February, the chamber will present its third study in regards to Greek hotel performance at its 2nd General Meeting to be held during the HORECA expo.

Next month, the chamber’s fourth study on third age tourism will be presented.