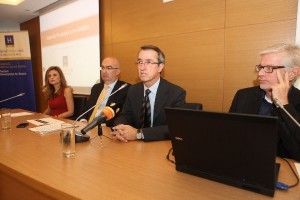 The development and promotion of an integrated network of medical services for foreign visitors at a local level through the launch of pilot programs in Lasithi, Rhodes, Santorini, Athens, Thessaloniki and Thessaly was suggested yesterday, 19 November, by the Hellenic Chamber of Hotels during the presentation of the study “Development of Medical Tourism in Greece.”

The chamber’s study was conducted by the Institute of Social and Preventive Medicine.

According to the study, the pilot programs would be implemented through local hospital units with the participation of primary clinics, hoteliers, travel agents, local government and transport services.

The pilot programs would initially launch to evaluate the feasibility of the research project based on the capabilities of local providers and agencies.

The study showed that a realistic target for Greece in the medium term would be the annual arrival of 100,000 patients (medical tourists) that would each spend an average of 4,000 euros (3,000 euros for medical expenses and 1,000 euros for accommodation and other expenses) in the country.

According to the study, in 10 years time, if cross-border care is developed in the EU and the country’s healthcare infrastructure improved through public private partnerships (PPPs) then medical tourism could generate revenue of some two billion euros per year.

The study showed that without major investments, Greece could provide international competitive rehabilitation travel packages (through the collaboration of rehabilitation centers with hostels and hotels); fertility treatments-in vitro fertilization and assisted reproduction (through the collaboration of medical centers with hotels); facilities for dialysis patients (hotels and rooms-to-let associated with dialysis centers); spas and rehabilitation centers (equipped with necessary infrastructure for individuals with musculoskeletal disorders, neurological disorders, the elderly); and packages for ophthalmology, cosmetic surgeries and other aesthetic procedures.

The hotel chamber has forwarded the “Development of Medical Tourism in Greece” study to the Ministries of Health and Tourism for the examination of key issues in both sectors so medical tourism could be promoted in Greece.

To read the study (in Greek), press here.