Greek Hotels In Favor Of Shops Opening On Sundays 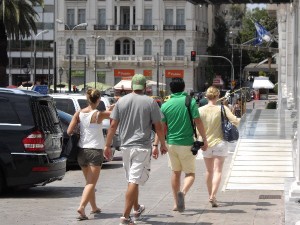 Tourists tend to turn their backs to city-break destinations that are not “alive” on weekends, according to Greek hoteliers.

Greek hoteliers in Athens and Thessaloniki are in favor of the government’s intention to allow the optional opening of Greek retail shops on Sundays as it would benefit city break tourists on holiday in the country. Sunday opening is a long-standing taboo in Greece.

The Development Ministry is in the process of introducing a new framework that would give the option to small and medium-sized businesses (up to 250 square meters) to open on Sundays. The ministry said that the shops in question can not belong to a retail chain or have the status of a shop-in-shop.

The new framework is currently under public consultation.

Citing the poor performance of tourism in Athens center, the Athens-Attica Hotel Association said that based on practices of competing city break destinations, open shops on Sundays could be a powerful “tool” to attract tourists.

“It is a necessary condition for a so-called city break destination to have a commercially motivated city center over the weekend so tourists can shop and enjoy a lively city in every sense,” the hotel association said in an announcement.

The Thessaloniki Hotels Association was on the same wavelength as it encouraged small and medium sized entrepreneurs to follow international practices and offer an additional incentive for tourists to visit Greece.

“The potential tourist, before deciding on a destination, will research to choose the best destination for a short holiday and usually destinations that are ‘alive’ every day of the week are selected,” the association said in a press release.

According to press reports, Greek small and medium-sized enterprises saw an 11.8 percent year-on-year drop in turnover in September, while 68,000 businesses in Greece have shut down in the last two and a half years.

For this month retail shops are allowed to open on the last two Sundays of the year, 23 and 30 December, compared with just one Sunday in previous years.