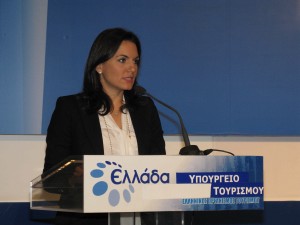 Tourism Minister Olga Kefalogianni during her first official press conference to the media at the Greek National Tourism Organization offices in Athens.

“Our goal is to maximize tourism income and showcase Greece as a global strong tourism force,” Tourism Minister Olga Kefalogianni said during her first official press conference to the media, yesterday, 19 October.

The Tourism Ministry’s goal is based on a new national tourism development plan that will support entrepreneurship with investment facilitation, develop a modern institutional framework for tourism and special forms, assure tourism infrastructure and service quality and invest in human resources.

The investment projects currently in the works involve the creation of hotels with over 300 beds, on the islands of Kea, Milos, Ios, and Crete, and the regions of Boeotia and Achaia. Details on the investments will be announced soon.

The tourism minister underlined that the legal framework that concerned investments in Greece was currently under revision to address continual disorders and setbacks in entrepreneurship development.

In regards to boosting entrepreneurship, Mrs. Kefalogianni said the ministry was in close cooperation with the ministries of development and finance to simplify procedures and promote arrangements that facilitate growth, especially for tourism residential accommodation and special interest tourism.

In regards to marine tourism, a bill to provide growth potential for yachting and diving tourism was under preparation in collaboration with the ministries of shipping and finance. Plans include the upgrade of Greek port infrastructure and services and coordinated actions with relevant tourism professionals.

Mrs. Kefalogianni also announced that the new special zoning plan for tourism had been completed in close collaboration with the Environment Ministry. Its exact content will be announced over the next few days.

She added that many of the ministry’s actions and initiatives aim to extend the Greek tourism season, which is limited to the summer months. 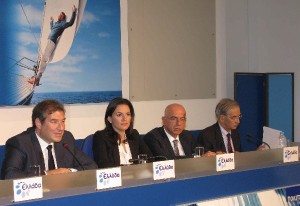 GNTO Revamp
“A large and valuable asset of Greek tourism is the Greek National Tourism Organization,” Mrs. Kefalogianni said and underlined that major improvements would be made to the organization to meet the growing needs of the times and form a new identity for Greek tourism.

“A new (improved) GNTO that can combine many years of experience and expertise with the freshness and innovation Greek tourism needs today,” she said.

Plans for the “new” GNTO include a thorough restructuring process to enhance its operation, a reshuffle of the organization’s offices abroad in accordance to the needs of the tourism market and modernization of the inspection process of tourism businesses.

The tourism minister said the GNTO’s new image would be apparent during the upcoming World Travel Market in London (5-8 November 2012) where details on Greece’s campaign to the foreign markets would be presented.

She underlined that campaign methods used in the past would be avoided as the GNTO would follow a more targeted, intelligent and innovative direction based on a reformed budget.

Athens
In regards to the Greek capital, the tourism minister said Greek tourism could not recover without the recovery of Athens.

“Repeated episodes in central Athens… the taking over of the streets and the increasing violence of extreme antidemocratic groups devalue our tourism product and tarnish the country’s image abroad,” she said.

In August, while addressing Greek Parliament, the tourism minister requested an industrial peace agreement with political parties, employer associations and worker unions to avoid extraordinary situations and strike action during the summer months.

According to Mrs. Kefalogianni, her request went unheard.

“The restoration of the image of the city of Athens as a safe and attractive tourism destination is at the heart of our policy,” she said. On the issue of safety, the tourism minister referred to her cooperation with the Public Order and Citizen Protection Ministry.

The tourism minister’s press conference followed her recent trip to the United States, a visit that was in the context of a strategy introduced this summer and a studied approach to markets of special interest to Greece. Visits in this context had been made previously to Turkey, Abu Dhabi and the UK.

“I visited these countries to enhance tourist traffic by coming into contact with tour operators, airlines and cruise lines, as well as to attract investors for accommodation, ports and tourism infrastructure in general,” she said.

On Monday, 22 October, Mrs. Kefalogianni will travel to Germany.

The tourism minister is also expected to visit the US again in December to strengthen cooperation with companies and professionals that promote Greek tourism.