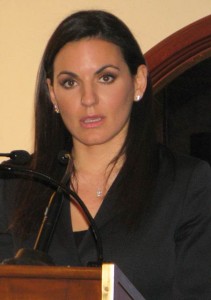 While speaking to the UK media, Tourism Minister Olga Kefalogianni revealed plans to unveil a new image for Greece at the World Travel Market (5-8 November) this year as part of a trade and consumer campaign. “We plan to revamp Greece’s image, both as a brand and in terms of promotion,” she said.

The GNTO and UK tour operators Cosmos, Sunvil and Olympic Holidays have agreed to jointly cover the cost of a campaign that would run in print media and online channels. The cost is some 192,000 euros.

“The climate is gradually improving and step by step we can reverse the negative image of Greek tourism and last-minute bookings,” Mrs. Kefalogianni said.

Since Greece’s new government took power in June and a sense of political stability was formed, bookings to the country have been on the up.

However, UK bookings to the country recorded a nine percent drop due to the recent political instability (two rounds of national elections that lasted two months) and negative publicity.

“Holidaymakers were a bit reluctant to come to Greece and we saw that in the bookings in the months of the election campaigns and during the elections,” the tourism minister said in an interview to Travel Weekly.

The UK is Greece’s second largest tourism market (Germany is first) but in terms of importance, the tourism minister said the UK “is number one.”