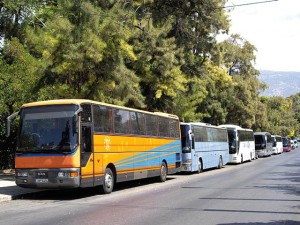 The establishment of a special electronic seal of authenticity for Greek tour buses was discussed between the General Pan-Hellenic Federation of Tourism Enterprises and the Transport Ministry. The seal is said to put an end to the circulation of illegal coaches.

A bill that will regulate the legal details in regards to the pending liberalization of land passenger transport will be tabled in parliament in April 2013 by the Transport Ministry, the General Pan-Hellenic Federation of Tourism Enterprises (GEPOET) said. By 2015 the market should be open to operate without restrictions.

The liberalization of land passenger transport was just one of the 15 points mentioned on an official memo delivered to Transport Minister Kostis Hatzidakis by GEPOET during a meeting last month.

The requests on the memo mostly concerned problems faced by the tour bus sector as well as development issues such as the funding of tourism businesses and loan arrangements.

Among issues discussed were ways to protect the tour bus sector from the “route grabbing” by private buses and KTEL intercity buses.

VAT Cut For Restaurants Not Possible This Year