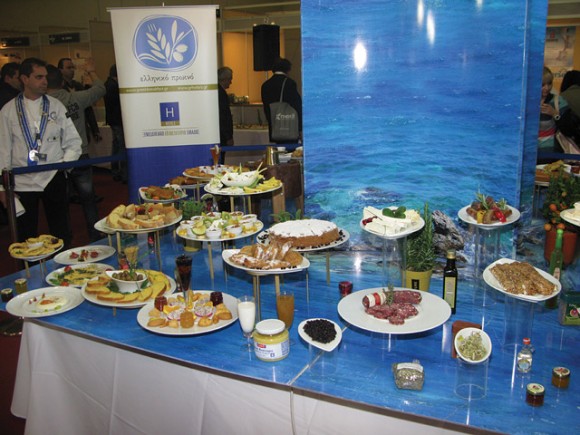 The “Greek Breakfast” section at this year’s HO.RE.CA. displayed breakfast options with recipes and products from various Greek regions. “We hope that Greek Breakfast will be established at Greek hotels, that there will be a connection with the primary sector and, at the same time, with society,” president of the Hellenic Chamber of Hotels, Yiorgos Tsakiris, said.

“It doesn’t take much to see that this is not the time for politicians but the time for entrepreneurs and professionals… Last year was a really great year and hopefully the same will happen in 2012,” Culture and Tourism Minister Pavlos Yeroulanos said during the inauguration ceremony of the 7th International Hotel, Restaurant and Cafe Show HO.RE.CA. held 4-7 February at the Athens Metropolitan Expo. “I think this year’s HO.RE.CA. is perhaps the most important ‘message’ we have heard, saw and felt this year as tourism industry representatives,” President of the Hellenic Chamber of Hotels, Giorgos Tsakiris, said during the inauguration ceremony of the 7th HO.RE.CA.. Mr. Tsakiris said he was “speechless” and very impressed by the high number of visitors that attended the trade show.

In spite of the times, this year’s hospitality and foodservice trade fair managed to attract some 100,000 professional visitors and, according to the organizing company Forum, “spread a message of hope to every corner of Greece.”

Some 400 exhibitors participated in this year’s HO.RE.CA. in an exhibition space of 36,000 square meters that covered the four halls of the exhibition center.

The organizers underlined that HO.RE.CA. 2012 is proof that targeted and well organized exhibitions could become an antidote to a crisis and an encouragement of economic development and progress.

The Hellenic Chamber of Hotels, in cooperation with the Hellenic Chef’s Association, presented “Greek Breakfast,” an initiative of the chamber for the promotion of Greek cuisine as a means for the development of Greek tourism, on the first day of the 7th HO.RE.CA.. The initiative was announced in November 2010. 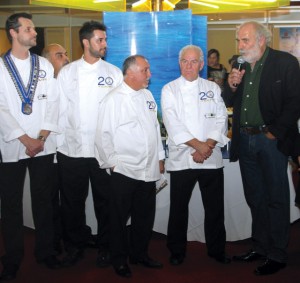 Hellenic Chamber of Hotels Board Member Yiorgos Pittas (right), accompanied by members of the Hellenic Chef’s Association, during his presentation of the “Greek Breakfast” initiative. Through the initiative professionals aim to show how the breakfast concept is an essential part of Greek hospitality. Mr. Pittas is the supervisor of the initiative.

The members of the chef’s association created various versions of Greek breakfast and were available to discuss them with visitors. The chefs specifically highlighted the local products from the Greek regions such as Chios, Mytilini, Kos and Rodos and promoted the uniqueness of each destination.

The hotel chamber has already started to prepare local pacts with the mentioned destinations, while the number of hoteliers and local associations that have expressed interest in participating in the program is continuously growing.

According to a study by Agropole, a consulting company, hoteliers who would serve Greek breakfast in their units, in the short term, would see a steady clientele by 49 percent, an increase in bookings by 15 percent, a rise in turnover by 10 percent, while the hotel promotion through mass and electronic media would grow by six percent.