The Hellenic Chamber of Hotels’ first ever general meeting was hosted at the Metropolitan Expo Center in Athens during Xenia hospitality equipment trade fair, held 25-28 November 2011.

“We were considered a heavy industry until the State decided to proceed with the collection of property tax through electricity,” President of the Hellenic Chamber of Hotels Yiorgos Tsakiris said during the chamber’s first ever general meeting hosted at the Metropolitan Expo Center in Athens. The general meeting was organized on the sidelines of the Xenia hospitality equipment trade fair, held 25-28 November 2011.

While speaking to an audience of some 1,300 hoteliers from all over Greece -perhaps the highest number ever recorded at such an event- Mr. Tsakiris highlighted the sectors pending problems and the new property tax was on the top of the list.

He stressed that from the moment the Greek state recognized properties used for industrial production and manufacturing (factories) as export sectors and excluded them from paying the tax, tourism has ceased to be the country’s “heavy export industry.”

Mr. Tsakiris underlined that the burden of cost within “this difficult international competitive environment” would cause Greek tourism to be uncompetitive and eventually it would lead the sector out of the market.

In regards to the property tax “discount” that sees the 35 percent of communal areas of hotels to be exempt, the chamber’s legal representative, constitutionalist Nikos Alevizatos, said the “discount” was unfair as the law recognizes only the reception area of a hotel as a “communal area.”

The chamber has filed a claim to the Hellenic Council of State (Symvoulio tis Epikrateias) against the new tax.

Mr. Tsakiris also referred to the Employment Ministry’s indifference to the unfairness in regards to OAEE (Insurance Organization for the Self-Employed) contributions and said the chamber would take up the matter in court.

“It is absurd that 1,500 small family hotels with a capacity of less than 10 rooms are currently obliged to make contributions to OAEE while 30,000 rooms-to-let units of the same capacity are excluded,” he said. 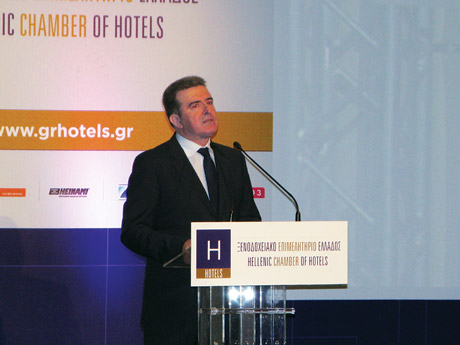 “You are all talk and no action,” hoteliers from the audience screamed when Development, Competitiveness and Shipping Minister Michalis Chrysochoidis delivered a speech at the Hellenic Chamber of Hotels’ first general meeting. Greek hoteliers booed Mr. Chrysochoidis in an act of protest to government policies about hotel businesses.

The chamber also called for the state to investigate the 40,000 Greek homes that are illegally rented by the day to foreigners for accommodation purposes.

“Why can’t the State do something? How can they not find the owners? We have found them as they are all listed on a website,” Mr. Tsakiris said sarcastically.

During the general assembly, a study on the performance of Greek hotels for 2011, carried out by the Research Institute for Tourism (ITEP), was presented.

According to ITEP, the average occupancy of Greek hotels increased slightly in 2011. Occupancy in May throughout the hotels in the country stood at 48.28 percent and increased by 2.01 percent against the same period in 2010.

In August 2011 the average occupancy of Greek hotels increased by 2.56 percent compared to the year before and stood at 77.8 percent.

However, the institute underlined that occupancy remains slightly lower compared to the corresponding months of 2008 and 2009.