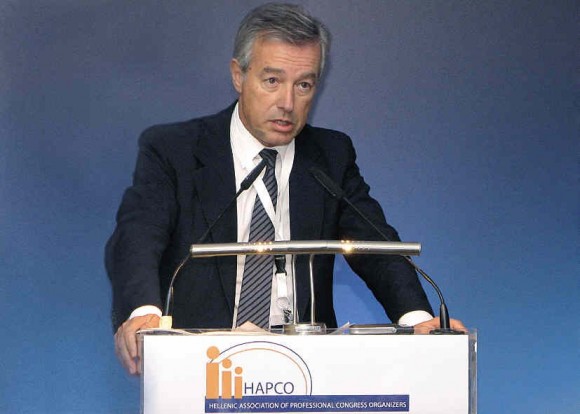 The president of the Association of Greek Tourism Enterprises, Andreas Andreadis, gave a stern speech last month at HAPCO’s 7th Pan-Hellenic Conference. During his speech, he referred to the clashes between hooded vandals and riot police that once again plagued Syntagma Square during the December 2011 riots and wondered why it was so hard for the State to arrest the culprits. “Does any of the political parties dare to speak? It’s always the professionals who end up paying the price,” Mr. Andreadis stressed. The clashes once again resulted to the destruction of public property and of the facades of the luxury hotels on the square.

President of the Association of Greek Tourism Enterprises (SETE), Andreas Andreadis, appeared quite outspoken last month and received a round of applause from the audience on the first day of HAPCO‘s 7th Pan-Hellenic Conference, held at Aegli Zappeion in Athens on 8 December 2011.

During his speech, SETE’s president criticized the fact that ministers involved in Greek tourism through joint ministerial decisions “have not come through” in regards to their obligations.

At that point he announced that the association would publicize a list of pending issues in the areas of economy and tourism along with the names of the ministers responsible for their implementation.

On 13 December, SETE released the list that referred to 27 obligations of nine (named) ministers.

In the announcement, SETE clarified that the mentioned “obligations” were agreed on by all political parties of the Greek Government at the association’s tenth annual tourism and development conference “Tourism: A matter of national importance” held in November 2011.

“The real economy is collapsing and there is no time to lose,” SETE said.

The name of Culture and Tourism Minister Pavlos Yeroulanos was on the top of the list and, in regards to measures that fall into his responsibility, SETE underlined that already the “cooperation is good.”

Mr. Yeroulanos was called on to table a bill to fight bureaucracy in tourism accommodation, to establish the agreed marketing company for tourism based on a public-private sector partnership and to upgrade museums and archaeological sites and extend their opening hours for the whole year.

Next name on SETE’s “must do” list was that of Economy Minister Evaggelos Venizelos for whom SETE said is responsible for the implementation of a unitary 6.5 percent VAT rate on the entire range of travel package services.

In addition, among the economy minister’s responsibilities is the return of the VAT rate on food catering services from 23 to 13 percent and the 50 percent cutting of the airport tax charged by Athens International Airport.

In regards to transport, the association highlighted the “complete and immediate liberalization of land transport-taxis, trucks and KTEL buses” on the list of responsibilities of Transport Minister Makis Voridis.

As for Citizen Protection Minister Christos Papoutsis, SETE listed the “immediate creation of reception areas to accommodate illegal immigrants” as his top priority.

Also, Mr. Papoutsis is called to “deal with” the hooded youth that vandalize Athens center during demonstrations and do so according to UK standards.

The association underlined that if the listed measures are in fact implemented over the next three months, tourism would be protected, conditions for a positive 2012 tourism year would be created and the country’s economy would be reset.

SETE intends to publish the achievements of the ministers in March 2012. “The tourism world will then judge,” the association concluded.

Visa Centers To Open In Turkey