“With the current bipartisan composition of the Culture and Tourism Ministry, we will not understand, justify, explain, accept or even tolerate the possibility of failure to implement concrete promises, commitments and agreed procedures towards a common direction,” Yiannis Retsos, president of the Athens-Attica Hotel Association said in late November 2011 during the association’s 42nd Annual General Assembly.

Hoteliers of the city center are said to be at a loss with Athens-Attica steadily declining as a destination from October 2008 and onwards and the systematic degradation of the historic and commercial center due to crime and street riots.

On his part, Culture and Tourism Minister Pavlos Yeroulanos admitted that the current situation in the Greek capital showed that the Greek Government failed to effectively coordinate its efforts in regards to the problem.

“Although the problem of Athens occupied three Cabinet meetings and the coordination of the effort was taken upon the vice president of the government (Theodoros Pagalos) himself, the problem has not been solved,” he said.

Mr. Yeroulanos said although important steps were made, the problem has not been solved because the solution is stuck in bureaucracy and decisions of committees and subcommittees.

The culture and tourism minister said that through the new coalition Government (formed November 2011), the severe problems of the city center could be eased via solid initiatives. 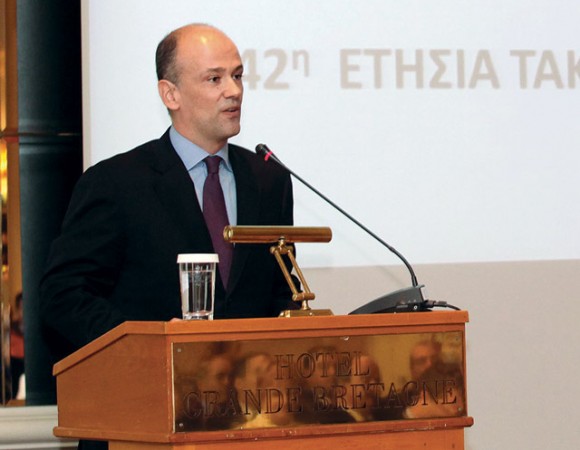 During the latest riot in December 2011, vandals caused damage to Syntagma Square and smashed the Hotel Grand Bretagne’s marble steps for the sixth time. After receiving criticism, Citizen Protection Minister Christos Papoutsis said that he’d rather “have broken marble than a broken head.” In reply to the minister’s comment, the president of the Athens-Attica Hotel Association, Yiannis Retsos (photo), said that neither broken heads nor broken marbles are preferred. “It’s the State’s obligation to provide solutions to problems and not create dilemmas and we would rather hear the Government tell us more in regards to its plans for the 6,500 lost jobs from the hotels in Athens from May 2008 to May 2011,” Mr. Retsos said.

During his speech, Mr. Retsos referred to the “unpleasant results” of the course of Athenian hotels based on a study by the Research Institute for Tourism (ITEP) on the performance of Greek hotels for 2011.

Mr. Retsos firmly underlined that Athens is in need of active support through a specific plan -agreed by all relevant parties- that would include coordinated decisions and specific activities.

He stressed the need of 24-hour police patrols in the center of the capital.

“How is it possible today for the citizens of Athens to request continuous surveillance of the city center and for the Citizen Protection Ministry to turn a deaf ear citing budgetary reasons, at a time that crime has evolved to the number one problem?” he wondered.

The association’s president called for package products for visitors of the city, a targeted promotion of archaeological sites and the ability for visits and tours throughout the day to all of the capital’s attractions.

Mr. Retsos also repeated measures demanded by the vast majority of tourism professionals such as the immediate reduction of the costs of the Athens International Airport “Eleftherios Venizelos.”

According to recent figures released by the Association of Greek Tourism Enterprises (SETE), Athens’ airport saw a 5.77 percent decrease in international arrivals for November 2011.

SETE’s data showed that for the first 11 months of the year, international arrivals at Eleftherios Venizelos dropped by 3.16 percent.