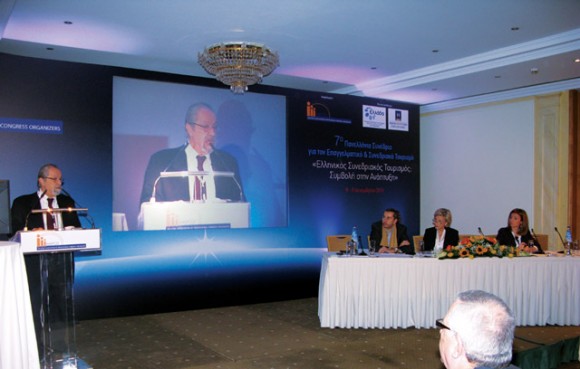 “The socio-political events and the effects of the economic crisis that has plagued our country and its citizens, has transformed Greece into an undesirable destination that frightens organizers, sponsors and conference delegates and presents Greek professionals as unreliable and insolvent,” Hellenic Association of Professional Congress Organizers (HAPCO) President Dinos Astras stressed last month during his opening speech at the association’s 7th Pan-Hellenic Conference.

HAPCO’s two-day conference (8-9 December 2011) entitled “Greek Meetings Industry: A Contribution to Development” attracted a majority of PCO’s, tourism professionals, tour operators and included sessions and workshops. The conference included topics that had emerged from the recent developments in the Greek congress and political scene.

The association’s president stressed that business and conference tourism dropped in Greece in 2011 and he predicted a 50 percent reduction in the number of conferences (mainly of medical nature) to be held in Greece this year.

Greece, at the moment, is ranked 19th place worldwide in organizing international conferences.

HAPCO’s president stressed that conference tourism needs the Greek Government’s support as the sector is called to address major issues.

Mr. Astras said problems include the certification of the PCO profession, the need of a crisis management committee, the need for a conference registry and the establishment of a coordination committee under the Culture and Tourism Ministry.

During the first session of the conference, Deputy Culture and Tourism Minister George Nikitiadis spoke in regards to the role of the tourism leadership in crisis management.

The deputy culture and tourism minister said that now that Greece had found its tourism identity conference tourism would be placed on the right track.

He then announced that in January 2012 the ministry would release the strategy for conference tourism to be followed by the State and relevant agencies for the sector’s development.

Mr. Nikitiadis agreed that an organized conference registry was indeed very necessary in order for a strategy on conference tourism to be followed. 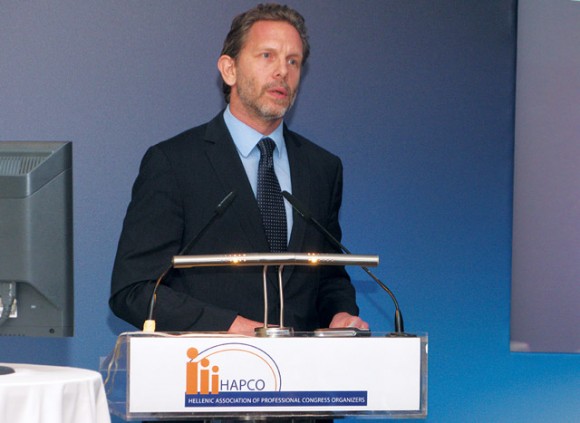 During his speech at HAPCO’s 7th Pan-Hellenic Conference, Culture and Tourism Minister Pavlos Yeroulanos said Greece currently has conference facilities that could easily support conference and business tourism. He also underlined that investment interest was shown last month in regards to the transformation of the TaeKwonDo Olympic Venue in Palio Faliro into a Metropolitan Conference Center.

The deputy minister said he intended for more Greek convention bureaus to be established throughout Greece and also said that a conference tourism committee (that would have some 30 members) was very close to becoming official.

Other presentations during the first session included the experience of Greece’s two big cities -Athens and Thessaloniki- in attracting conferences.

In regards to Athens, Yiorgos Broulias, president of the Athens Tourism and Economic Development Company (ATEDCo), said the Athens Convention Bureau aimed for a long-term national strategy in regards to conference tourism.

Mr. Broulias presented ACB’s proposals that included the recording of Greek historical and archaeological sites of interest that could be used for hosting events.

He also added that ATEDCo has almost all details settled for the circulation of the Athens Pass card for tourists and conference delegates but that without the ministry’s assistance, “the project cannot get off the ground.”

In regards to Thessaloniki, Anastasios Tzikas, CEO of the International Fair of Thessaloniki, said that unfortunately Greece’s second largest city always finds obstacles when it comes to conferences and exhibitions.

According to Mr. Tzikas’ presentation, the International Fair of Thessaloniki was the “soul of the city,” but after 1995 the city began to present entrepreneurship problems and since then lost its conference character.

Mr. Tzikas said the International Fair of Thessaloniki’s strategic objectives for 2012 include a possible merge with Helexpo and a new convention center.

Another presentation that attracted interest was that of Valentini Amarantidou, Artion conferences and events’ general director, who presented the conference situation in Greece from the PCO perspective.

Ms. Amarantidou said Greece has many advantages and although lacks a Metropolitan Conference Center, “could still host conferences with the existing infrastructure.”

HAPCO’s 7th Pan-Hellenic Conference was held under the auspices of the Culture and Tourism Ministry and the Hellenic Chamber of Hotels.

GTP was among the communication sponsors of the conference.