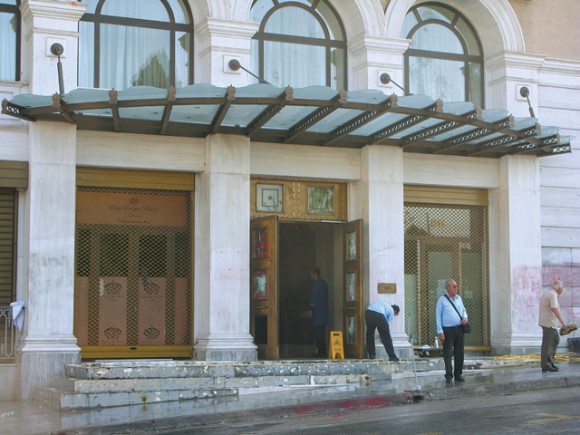 Employees of the King George hotel on Syntagma Square pick up the pieces after the violent anti-austerity protests. On 29 June the hotel was evacuated “due to the uncontrolled nature of events taking place at Syntagma Square.”

“Greece is a country that offers an excellent tourism product and this should not be tarnished in any way,” Culture and Tourism Minister Pavlos Geroulanos said in a statement recently in regards to the impact violent events in Athens had left on tourism during the 28-29 June protests.

The culture and tourism minister said both Greeks and foreigners abroad were wrong to focus on “some sad events.”

The “sad events” Mr. Geroulanos was referring to included halts to ports and airports and the evacuation of the five-star King George hotel in close distance to the Greek Parliament.

In an announcement, the Association of Greek Tourism Enterprises (SETE) requested, from the Greek Government and opposition political parties, for the immediate application of a moratorium to prevent new episodes that would create a bad impression of Greece abroad.