Cancellations were said to have soon jumped to some 20,000 in 21 central hotels in Athens while it was reported that some 20 conferences and corporate events (some scheduled for 2012 and 2013) were also canceled due to safety concerns.

During a press conference, Mr. Retsos said that although this year’s tourism season began positively for the Greek capital, with a five percent increase in arrivals and a 1.6 percent increase in revenue, Athens was now at risk of being labeled as an “unsafe destination”-a fatal outcome for the entire Greek economy. 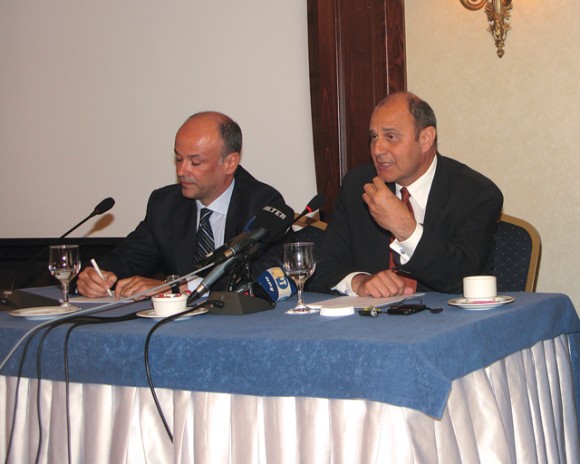 Athens-Attica Hoteliers Association President Yiannis Retsos and Grande Britain’s Hotel Manager Tim Ananiadis during the association’s press conference last month. “The issue is not what we lost but what we will lose and unfortunately the problem is not just about hotels in the center as we are losing conferences scheduled for 2012-2013,” Mr. Ananiadis said.

Following the mass cancellations, the association sent an official letter to the Greek Government and requested measures that included the non-payment of property tax for 2012, a deduction of insurance contributions and a one-year extension of the OAED (Manpower Employment Organization) program to maintain 10,000 jobs in the hotels in Athens with a 40 percent subsidy to employers’ contributions.

However, when questioned by the Greek media, Deputy Culture and Tourism Minister George Nikitiadis said the support measures requested by Athens’ hoteliers were unlikely to receive a positive response due to the country’s poor financial situation.