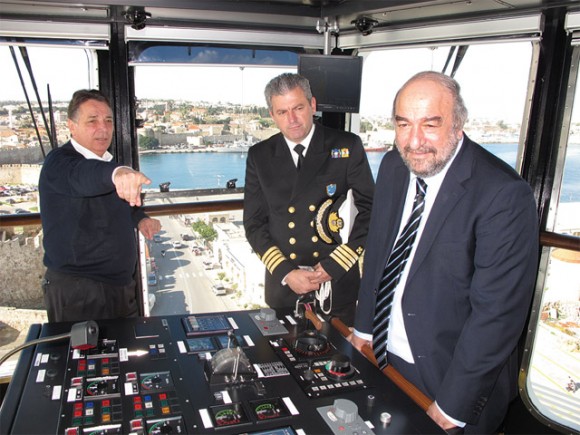 The captain of the Panama-flag cruise ship Fantasia showing the controls on the ship’s deck to Deputy Culture and Tourism Minister George Nikitiadis when the ship docked at Rodos Port last month. Mr. Nikitiadis recently held a meeting with Greek cruise tourism professionals and discussed the need for the improvement of cruise ship passenger services in Piraeus and various ports in Greece. He also informed that the government is planning to expand the cruise tourism season to the winter months.

“A new era begins for Greek tourism and cruise in our country with the arrival of 2011,” Deputy Culture and Tourism Minister George Nikitiadis said last month after welcoming the Panama-flag cruise ship Fantasia to Rodos. Fantasia was the first cruiseship to approach Rodos Port in 2011.

“Following the lifting of cabotage restrictions, Greece’s ports are in the center of the attention of major shipping companies that carry thousands of passengers on cruiseships each year,” Mr. Nikitiadis said.

The deputy minister’s statements followed the signing of a relevant joint ministerial decision in mid-December 2010 by Maritime Affairs, Islands and Fisheries Minister Yiannis Diamantidis and Culture and Tourism Minister Pavlos Geroulanos. The decision sees to the lifting of cabotage restrictions for non-European Union flag cruise ships.

The joint ministerial decision defines the documents and the content of the contract for non-European Union flag cruise ship companies in order for their ships to embark and disembark passengers at Greek ports.

The contract is said to offer bureaucracy-free unrestricted activity to cruise shipping companies in Greek waters, without undermining the interests of the public sector.

According to Mr. Geroulanos, meetings with non-EU flag cruise ship companies were on schedule in an attempt to make use of the initiative as much as possible for 2011 and to pave the way for 2012, which could be the year of the full lifting of cabotage restrictions.

According to the decision, the boarding fee for each passenger, per round cruise journey for ships flying a non-EU flag, is 3.95 euros.

However, international cruise companies would receive a discount on the boarding fee of 20 percent on the condition that at least one percent of the ship’s crew is Greek.

The fee would also be reduced by seven percent for each additional Greek port of call included on the company’s declared itinerary.

The draft bill for the lifting of cabotage restrictions was signed into law on 25 August 2010 in an attempt to boost the Greek economy in a variety of ways with the removal of barriers that were imposed for many years.

In addition, in late December new US ambassador to Greece Daniel Bennett Smith hosted a teleconference discussion on the implementation of legislation lifting cabotage restrictions between US cruise company representatives and Greek government ministers at the US Embassy in Athens.

US cruise sector representatives requested clarifications on the abolition of cabotage and underlined the need to avoid obstacles (demonstrations and strikes) as already routes in 2011 have been canceled for Piraeus.

They also expressed their desire for a more flexible scheduling of access to archaeological sites and monuments for delegates of important conferences.