The recent visit to China by Tourism Development Minister Aris Spiliotopoulos has bore fruit, as several steps have been taken to unify Greece and China in their aim to promote bilateral tourism interests.

During the recent visit, his first visit as tourism development minister, Mr. Spiliotopoulos met with Beijing Vice-Mayor Ding Xing Yang, and they officially announced that Greece would be the country of honor at the cultural festival that would take place in June 2008, a month before the official opening of the Olympic Games in Beijing.

Mr. Spiliotopoulos expressed his satisfaction and said: “Being the country of honor at the festival will allow Greece to be advertised to millions of visitors from all over the world.”

He added, “The creation of a mixed committee would allow for a meeting in early 2008, where we can bring visitors from Greece that specialize in tourism, not only to learn more about China but to also allow the Chinese to learn more about Greece and the Greek tourism product.” 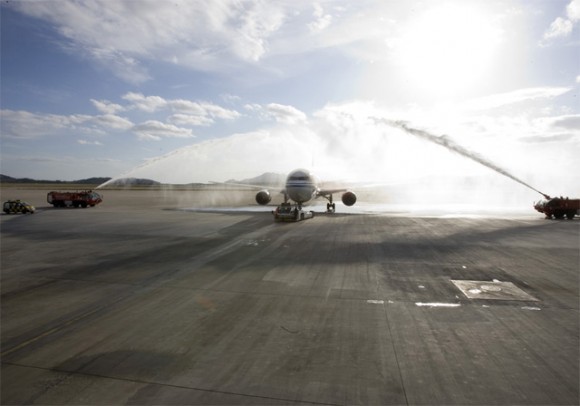 The first Air China flight from Athens to Beijing departs Athens International Airport, as tradition dictates, under the water arch.

During his visit Mr. Spiliotopoulos inaugurated the exhibition of the Greek tourism poster that was organized by the Greek National Tourism Organization at the “Greek House” in Beijing. At the opening, he said: “Today it is not only the tourism poster that traveled but the whole history of the GNTO, the history of Greece, our culture, because culture is the bridge that connects the two countries.”

He added, “With this cultural cooperation as a basis, we have earned our first 1,100 Chinese visitors that represent the musical culture of China, and will visit Greece next summer on a cruise ship.”

The tourism development minister’s visit to China corresponded with Air China’s launch of the new route Athens-Dubai-Beijing. In lieu of the first direct flight, Mr. Spiliotopoulos met with the president of Air China, Li Jia Xiang, at the airline’s central offices in Beijing.

Mr. Spiliotopoulos said: “Our aim is a high load factor for the flight and it is important that China also encourages tourism to Greece, which can only happen if successful promotion of Greece in China is made.” The tourism development minister explained that during his meeting with the president of Air China it was agreed the nine thematic sectors of Greek tourism would be promoted by the airline itself. An example of promotion is the special VISA credit card that will be issued during the Beijing 2008 Olympics, on which Greece, according to the tourism development minister, will be promoted.

Mr. Spiliotopoulos returned to Athens on the first Air China flight Beijing-Dubai-Athens (CA 943) which departed from Beijing at 20:40 local time on November 28 and arrived in Athens International Airport the next morning at 5:50 local time. The first flight from Athens to Beijing was at 9:00 on the same day and was inaugurated by the tourism development minister, who said: “The new route connects the country that is preparing for the 2008 Olympic Games, and the one that held them in 2004, and our aim is to increase routes, multiply passengers and meet new challenges.”

The inauguration ceremony concluded with the “ribbon bonding” ceremony by Athens International Airport CEO Yiannis Paraschis and Air China President Li Jianxiang to mark the bond of the airport to the new destination.

Air China departs Athens International Airport every Monday and Thursday with a Boeing 767-200.

SETE Outlook Optimistic for Tourism in 2008