The Hellenic Association of Travel & Tourist Agencies celebrated its eightieth anniversary at Costas Lazaridi’s Oinotria Land, which also celebrated 15 years since its creation. The event was held on the eve of world tourism day and was attended by the secretary general of the National Tourism Organization, Athanasios Oikonomou, representatives from all areas of the tourism sector and journalists in the field of tourism and travel.

The event was held on the vineyard of Oinotria Land and guests were given a tour of Mr. Lazaridi’s wine museum. After this, guests were treated to the gastronomic delights of the in-house chef, Jean Louis Kapsalas, and served a variety of wines and distillations from Mr. Lazaridi’s collection. They were entertained by the jazz quartet of the well-known company Berco.

President of HATTA, Yiannis Evangelou, expressed the significance of world tourism day celebrations and emphasized, “tourism is one of the most significant factors in the national and international economy and is the driving force for development and culture.”

Within this context, Mr. Evangelou explained, “Greece has the ability and resources to expand the horizons of its tourism product, and alternative quality tourism, such as Oinotria Land, should be a priority in the development of a future tourism model.”

On the actual day, HATTA organized a spectacular event dedicated to the world-renowned poet, Constantine P. Cavafy (1863 – 1933), a Greek of Alexandria and one of the most prominent poets of the twentieth century. 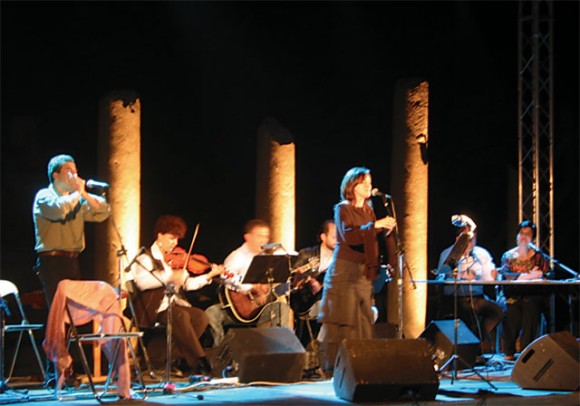 Music and poetry under the moonlight at the Ancient Roman Market.

The event was held in the Ancient Roman Market at Monastiraki where the works of C.P. Cavafy were recited, accompanied by music and video projections from the motion picture based on his life, by the Cultural Association of Upper Syros.

The decision to exhibit the life and works of the great poet in such a manner was a decision by HATTA “to show the way that the periphery must follow on its road to quality sustainable tourism development,” said Mr. Evangelou in his opening speech.

The president of the association added, “the positive direction in Greek tourism in the past few years has increased the demands and ambitions of everyone in the tourism industry for the greater usage of our workforce as well as the cultural, social and historical elements that Greece possesses.”

He continued: “These elements should be the motivating factor behind quality sustainable tourism development with respect to the natural environment and the physiognomy of the land.”

Mr. Evangelou concluded his speech by expressing his sincere hopes that the new tourism development minister, Aris Spiliotopoulos, would take even more dynamic initiatives and work closer together with all tourism bodies and related ministries so as to achieve the best results through cooperation and mutual understanding.

Yannis G. Valinakis, deputy minister for foreign affairs, honoured the event with his attendance, as did GNTO’s Athanasios Oikonomou, ambassadors, general secretaries for the peripheries, representatives of local authorities, and a plethora of guests from the worlds of tourism, culture and the arts.

The event was supported by the ministry of culture and sponsored by Aegean Airlines, Athens International Airport and Athens Tram SA while ΣΚΑΙ 100,3, Piraeus- based 90,4 FM and Greek Travel Pages were communication sponsors. Media coverage was by ERT channel program “We live in Greece” and the event was supported also by Blue Star Ferries.