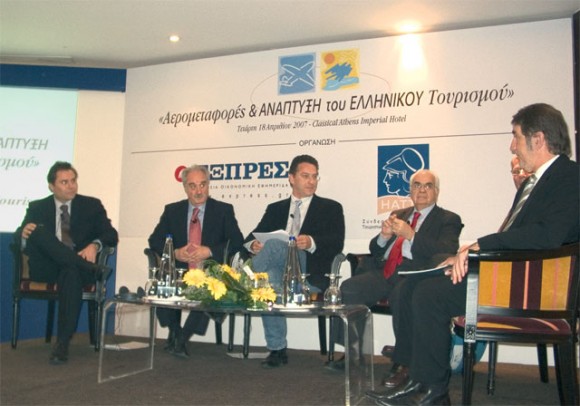 One of the panels at the airline conference included: Eftichios Vassilakis, vice chairman of Aegean Airlines; Yiannis Evangelou, president of the Hellenic Association of Travel and Tourist Agencies; the panels moderator; and Nikos Skoulas, chairman of Trinity International School for Tourism Management and former Greek tourism minister and chairman of the Greek National Tourism Organization.

If Greece wants to increase its number of incoming tourists, the country must concentrate on upgrading its 38 airports -in particular the 15 that accept international air passenger traffic- increase air links, and airports and airlines must work more closely to create a better and more seamless product for passengers.

The above consisted, in essence, of the main points analyzed by foreign and Greek speakers at the recent Hellenic Association of Travel and Tourist Agencies (HATTA) conference on “Air Transport and Development of Greek Tourism – New Opportunities,” which was organized in cooperation with the Greek financial paper Express as part of the its Tourism Panorama exhibition.

Professor Andrian von Dornberg, concentrated on the phenomenal surge in low-cost carrier traffic and emphasized that they have some 300 new passenger jets on order. And added that because their cost advantages cannot be met by “luxury” carriers, this growth would continue.

“We’ll see Internet airline bookings increase by some 45% this year and we’ll see that traditional travel packages will lose out to the ‘do-it-yourself’ traveler,” he said.

Juerg Staub, a regional director for the International Air Transport Association, did not seem concerned with low-cost carrier traffic. Although he did insist that his member airlines were not “luxury” airlines but rather “network” airlines, and are not point-to-point airlines as are low-cost carriers.

He also said that network carriers have cut costs substantially – by year end there will be no paper tickets, all will be done electronically.

“We have seen airlines cut their costs by as much as 30%…and we have seen that for the first time in years our network carriers are posting profits,” he said.

He added that the EU’s “open skies” agreements, considered by all speakers as a prerequisite for better service, prices and an increase in travel, is a step in the right direction but that much more must be done before we see a liberalized market.

Eftichios Vassilakis, vice chairman of Aegean Airlines, also stressed the need for liberalization, particularly in the domestic air sector. “We need more regular flights in this country and better infrastructure at regional airports if we want more (up-market) independent travelers.”

He added that airport charges average, worldwide, 4-8% of an airline’s overall expenses, according to a previous speaker, while Aegean’s airport expenses in the Greek market are a whopping 16% of costs.

Constantinos Hatzidakis, a member of the European parliament who specializes in air transport, said the EU is working vigorously on new air transport policies – one of which will be a more overall airport tax – that will allow for liberalized and safe marketplace.

“We are also preparing for the future…in less than 20 years we will see double the amount of air traffic and we must have the infrastructure ready,” he said. In the same vein, there was mention of new EU subsidies for regional airports and airlines that open new routes.

Dr. Yiannis Paraschis, the new CEO at Athens International Airport, summarized the phenomenal success of the airport and rhymed off figures that showed the success would continue with the introduction of new airlines, new routes and new commercial endeavors. He also announced the airport would open its gigantic exhibition center in 2009.