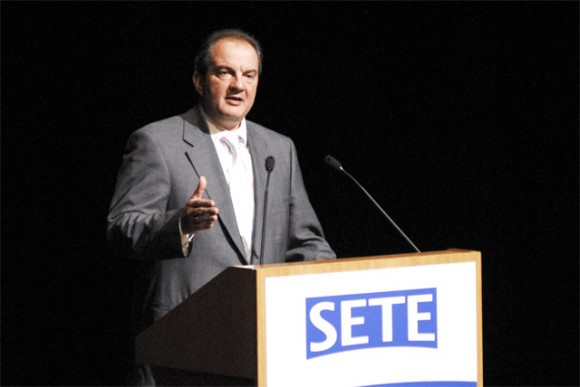 Environmental concern was one of the key issues in the PM Costas Karamanlis’s speech at the 15th general assembly of SETE.

delivered by the Prime Minister Constantinos Karamanlis at the 15th general assembly of the Association of Greek Tourism Enterprises.

Mr. Karamanlis emphasized how we are all aware that the world today faces great challenges, but also new opportunities. He said “global warming and the consequent climate changes require an international wake-up call and drastic action. Greece replies to this call with tangible action.”

Mr. Karamanlis explained that Greece is enriching its plans and increasing its measures by “reducing air pollution, protecting the environment and promoting the richness of our natural environment.”

He emphasized that citizens and the state should unite in this cause, and in this union “the tourism sector is obligated to lead the way.” He also said “the beauty of our natural surroundings, the sun and the sea are the wealth of our country and the quality of our life that we are obliged not only to protect but also to enrich.”

Mr. Karamanlis concluded that it is our obligation to retain a “strong environmental awareness.”

These comments were well received by Stavros Andreadis, president of the Association of Greek Tourism Enterprises, who had questioned how close Greece has come to applying technical knowledge that is environmentally friendly and conscious. He also emphasized, in his speech, the importance of a “vision for a chamber whereby tourism and business enterprise can effect and change the aesthetic appeal of tourism development, so as to have a positive impact on Greece’s environmental and cultural wealth.”

On the economy, Prime Minister Karamanlis said: “Serious weaknesses in the growth process had undermined the competitiveness of the economy and created counter-incentives for investments.”

“The complex bureaucratic procedures, the limited use of new technologies and the non-existence of zoning plans for new forms of tourism were the main causes for the lack of growth in tourism.”

He said “Greece, for many years, has utilized but a slice of its tourism potential.” The government has taken several initiatives to diversify the tourism services offered, with emphasis placed on investment in golf courses, marinas, exhibition centers and theme parks.

Coinciding with this initiative, he said, is the development of alternative types of tourism, including business, sport, cultural, religious and therapeutic.

This is necessary, according to Mr. Karamanlis, as Greece is the only country in Europe where “every form of tourism can be developed in its entirety. Greece is singled out for its natural beauty and uniqueness of its islands. It has a cultural and monumental history that brings admiration from citizens around the world.”

On investment, he said that more than 800 tourism investment plans have been approved with a total budget of 2.5 billion euros, and which would create 5,500 new jobs.

As well, since March 2004 more than 4,150 business plans have entered the government’s competitiveness program for subsidies, which now exceed 460 million euros, said the prime minister, and added that the absorption rate for funds for tourism has soared from 8 percent to 71%.