Another Record Year for Blue Flags 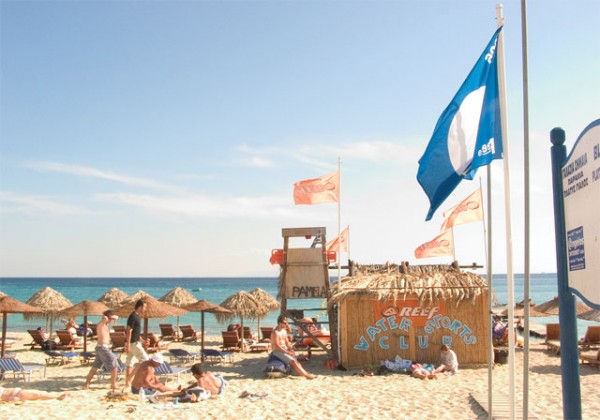 This year 404 Greek beaches received Blue Flags, compared with 383 last year, placing Greece in second place among the 40 countries participating in the program. A total of 2,549 beaches around the world received Blue Flags, which means that for every six beaches Greece has one with a flag. Greek marinas, however, are not a strong point as only five were awarded Blue Flags out of a total of 638 worldwide.

The Blue Flag program, established in 1987, is an internationally recognized symbol of quality awarded to beaches and marinas that meet very strict standards. Excellent water quality is only one of 29 criteria that include cleanliness, organization, information, bather and visitor safety, and environmental protection of the beach and vicinity. For marinas, 22 similar criteria must be met. Both beaches and marinas that receive a Blue Flag one year, must prove worthy again the following year.

The beaches and marinas in Greece that were awarded Blue Flags this year were announced last month by the Greek Society for the Protection of Nature, coordinator of the program since 1992 and the oldest environmental organization in Greece, and Alpha Bank, the sole sponsor of the program for the past six years. The Ministry of Environment supports the biological analysis of the water quality.

The Institute for Environmental Training (FEE), headquartered in Denmark is the international coordinator for the program.