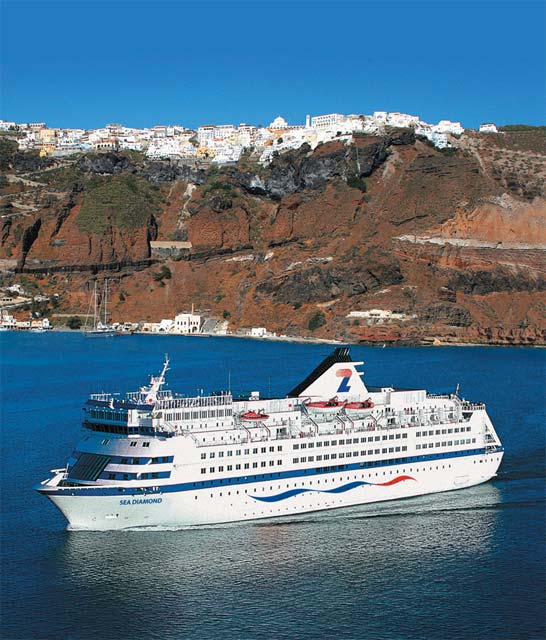 Last month, Louis Hellenic Cruises inaugurated the “Sea Diamond,” the latest cruise ship to join its fleet, with blessing of the ship followed with speeches by the Ministers of Tourism Develop and Merchant Marine, among others. The ceremony ended with the raising of the Greek flag on the ship’s stern.

Sea Diamond began 3-4 day cruises in the Aegean from Piraeus last month, and has the capacity for 1,250 passengers in 570 cabins.

Minister of Tourism Development Fani Palli-Petralia commended the company and its president, Kostaki Loizou, on helping to develop the Greek cruising industry and sea tourism, noting that cruises are at the top of the list of products American tourists desire. She wished them all the best “in their attempt to promote Greece as an international center of world tourism.”

Merchant Marine Minister Manolis Kefalogiannis highlighted the company’s role in the rebirth of cruises in Greece and pointed out that this effort significantly prompted “the growth of shipping and tourism, the two pillars of Greek economy.”

Company president Loizou said that the Sea Diamond furthered the company’s vision of growing while at the same time revitalizing Greek cruises, strengthening tourism and the national economy.

Sea Diamond is the company’s latest purchase. Constructed in Finland in 1986, and originally named Birka Princess, the ship was completely refurbished in Germany in 1999 at a cost of 25 million dollars. Louis Hellenic purchased the ship for 35 million dollars and spent a further 10 million on renovation and upgrades. The ship has up-to-date technical equipment and meets safety and environmental standards.