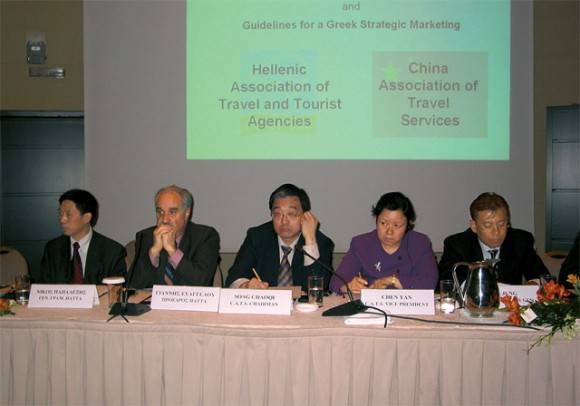 In a move to increase Chinese tourism in Greece, 50 Chinese tourism professionals were invited to meet with Greek colleagues last month by the Hellenic Association of Travel and Tourist Agencies. The association’s president, Yiannis Evangelou, explained that investment in the “rapidly growing Chinese tourism market could bring 300,000 tourists to Greece in 2008.”

At the conference inaugurating the visit, Song Cao Qi, vice-president of the China Association of Travel Services, listed Greece’s key attractions for Chinese tourists as “the ancient civilization, philosophy and the arts, originator of the Olympic games, natural beauty, the Aegean, the Greek way of life, hospitality and romantic atmosphere.”

Wang Xinjun, assistant president of China Comfort Travel Group, discussed the trends in the Chinese tourism market resulting from the improvement in the country’s economy, increasing income, simplification of procedures for international travel and approval of specific destinations.

Last year, he said, 25 million of the country’s estimated 30 million tourists traveled internationally for personal reasons. By 2010 outgoing tourism is anticipated to be more than 56 million, and the WTO forecasts 100 million by 2020.