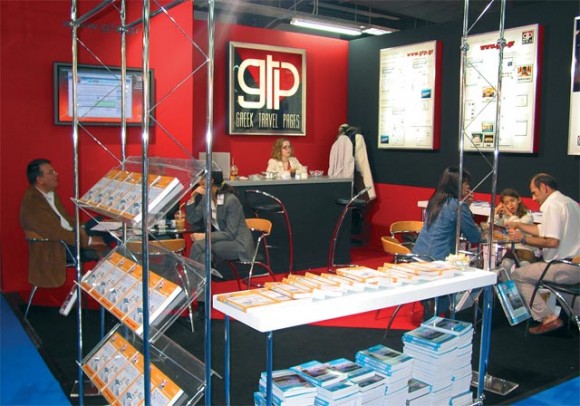 GTP continues its 31 years of participation in all major exhibitions in Greece and Europe.

Although this year’s Panorama welcomed a barrage of new visitors, the number of tourism professionals to the fair appeared minimal when compared with past years. Most said the venue, Expo Athens, Anthoussa, was too far away for them.

Professionals that did visit last month’s fair, however, were pleased with the venue, the fair’s organization and the comparative ease in getting there, thanks to the metro system combined with the fair’s shuttle bus service provided by Tsokas.

Tourism Development Minister Fani Palli-Petralia, who officially opened the 11th Tourism Panorama, in her speech highlighted the government’s efforts to expand domestic tourism, and once again reiterated that Greece has only utilized 15 percent of its development potential in tourism.

Deputy Minister for Development Anastassios Nerantzis said during the fair’s inauguration ceremonies that Greek tourism could create as many as 150,000 new jobs by 2010 and thus absorb some one-third of existing unemployment. He added that tourism represents about 15 percent of Greece’s gross domestic product and employs 16.5 percent of the active workforce.

George Kalofolias of Express, the fair’s organizers, introduced this year’s honored region Chalkidiki as an up-and-coming destination for Greek and international tourism which has significantly upgraded its tourism product.

In his speech, Chalkidiki prefect Argiris Lafazanis said that recent efforts to promote Chalkidiki to Greek and eastern European tourists have paid off. Greeks tourists to the region doubled in the last three years, and Russian and Romanian tourism arrivals increased substantially last summer.

Mr. Lafazanis emphasized Chalkidiki’s importance from prehistory to the present, which is evidenced by remains from seventy ancient cities, such as ancient Stagira and Olynthos. Mount Athos, he added, “was unique worldwide, representing 1,050 years of living Christian history.” 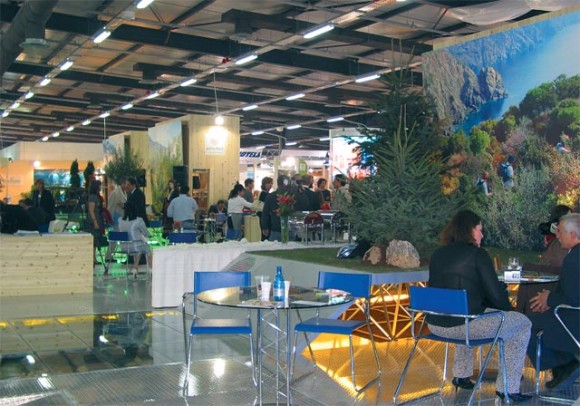 Chalkidiki’s extensive booth, the largest in the fair’s history, exhibited the region as a four-season destination with a range of new tourism experiences and highlighted local agricultural products.

Chalkidiki’s exhibition area, the largest in the fair’s history at well over 300 square meters, continued Mr. Lafazanis, “presented the region as a year-round destination featuring mountains and sea, with marinas, golf, walking and bicycle trails, natural spas, archaeological sites and museums.” It also highlighted the region’s excellent agricultural products, such as olives and honey.

Chalkidiki has almost 100,000 beds to accommodate visitors and more than 30 hotels operate all year, as do the agro-tourism lodgings in mountain areas.

According to Mr. Lafazanis, the prefecture has succeeded in keeping roads well-maintained and free of trash, has been planting trees, testing sea water quality, and continuing efforts to protect the environment from pollution and over-development. Some issues the prefecture is actively working to resolve are road congestion during high season and improved solid and liquid waste management.

At the panel discussion on Chalkidiki, Nikos Vasilakis, president of the Chalkidiki Mayors’ assosiation, said a crucial issue for tourism development was the issuance of visas to visitors from Balkan countries. He urged the government to increase personnel in consular offices in eastern Europe so that more visas could be issued in a timely manner. In Russia for example, only 1000 visas are processed each day.

Another speaker, Gerasimos Bakogiannis of the Chalkidiki Hoteliers Association, added that more personnel were needed “at border crossings to reduce the long wait and improve the country’s image.” 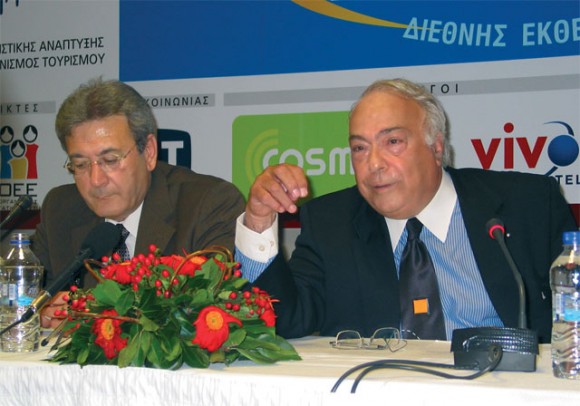 The Regional Development Agency of the Cyclades also organized a panel discussion, and Dimitris Bailas, Prefect of the Cyclades, discussed recent tourism promotion efforts. Mr. Bailas said that they are keeping pace with the modern information society by shifting to digital technology using DVDs and the Internet.

Giorgos Dambasis, president of the agency, and longtime documentary filmmaker, discussed the importance of mass media to tourism development. Three years ago, the Greek National Tourism Office only had a three-minute spot on the islands, so the agency prepared separate DVDs as cultural guides to all 24 Cycladic islands. These have been screened on the television station NET and Holiday Inn Greece. Four new spots advertising the islands were screened during the session, each focused on a specific theme, such as local people, culture and nature.

Another session focused on developing tourism in western Greece. Dimitris Karagiannis of the Tourism Development Company for Western Greece, explained that three prefectures were united in this venture, Etolokarnania, Ahaia and Ilia. The city of Patra, the current European cultural capital, is at the heart of this region. Mr. Karagianis said that the recent improvements in the transportation network, such as the new state-of-the-art Rio Bridge and seaplane service, have added important new access options.

The region, he continued, not only has significant cultural sites with a two-hour drive from Patra, such as Ancient Olympia and Delphi, but excellent beaches and rivers for water sports, mountain for hiking, a lake and three wetlands suited to bird watching. Mr. Karagiannis said that the company was in the process of developing a brand for the region to attract investment and promote tourism development. 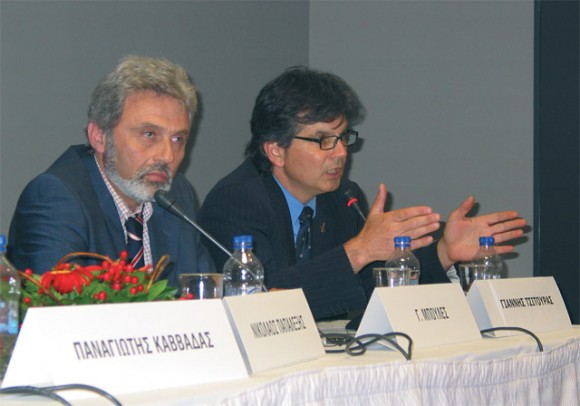 Giorgos Boules, mayor of Pylini with Giannis Tsitouras of Agrotouristiki S.A., on the panel discussing tourism development in western Greece.

The Mayor of Pylini, Giorgos Boules provided an interesting example of successful development in the mountain region north of Nafpaktos. Characterized as a depressed area, the three municipalities initially decided to cooperate and share resources to promote sustainable tourism development and preserve the environment, pine-tree forests, rivers and lakes. Now eleven municipalities are involved as well as local businesses and cooperatives. Together, they have succeeded in building a road network to connect the main towns. Hotel owners and local organic producers agreed last month on lower prices so that local products could be promoted. Also, programs to raise local awareness have been organized including festivals featuring local products, and excursions for local children to cultural and natural sites.

A local wine expert spoke about further developing wine tourism in this region long known for its excellent wine. Numerous wineries, such as Achaia Clauss, are already set up for visitors but wine routes can be easily developed to link them, and programs on Mediterranean cuisine and diet could further expand the program.

Other panel discussions were held on tourism development on Leros island, the Ionian islands, and Kastoria in northern Greece. 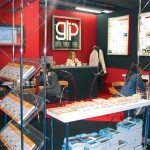 GTP continues its 31 years of participation in all major exhibitions in Greece and Europe. 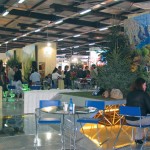 Chalkidiki's extensive booth, the largest in the fair's history, exhibited the region as a four-season destination with a range of new tourism experiences and highlighted local agricultural products. 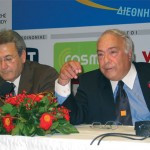 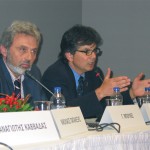 Giorgos Boules, mayor of Pylini with Giannis Tsitouras of Agrotouristiki S.A., on the panel discussing tourism development in western Greece. 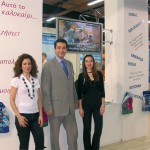 Louis Hotels’ Maria Roumeliotis of the Athens sales department, with Pavlos Gyparis, sales & marketing manager, and sales representative Thenia Georgopoulou promoting the company's hotels throughout Greece. Louis Hellenic Cruises, another company subsidiary, just added a new cruise ship, the Sea Diamond, to its fleet offering cruises in the Aegean, in an effort to make cruises a greater contributor to tourism in Greece. 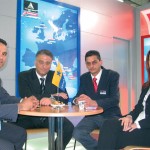 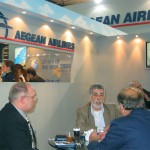 Tassos Georgopoulos (center), director of Wayfare Aviations Services Ltd, visiting the Aegean Airlines booth to learn more about the company's new flights covering some of the reductions by Olympic Airways. 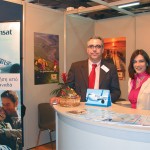 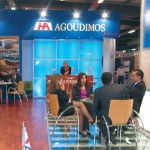 George Roumeliotis (far right), Agoudimos Lines sales & marketing manager, discussing ferry services with guests. The company recently announced that their ships Ionian King, Ionian Queen and Ionian Sky meet all the requirements for "Camping on Board." Reservations can now be made for the summer 2006 period. 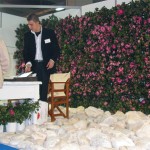 Nikos Nikopoulos, representing Mouressi Municipality, from its lush booth, providing information on the area's year-round activities. Also featured at the booth was one of the few tourism clusters working successfully in Greece. The Pelion Cluster, made up of local hotels, restaurants, and other service providers, offers special prices and privileges to tourists visiting the area. 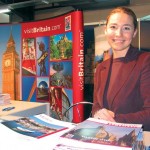 Natalie Kouzi, Visit Britain's representative for Greece, inviting Greeks to travel to Britain from the company's first booth ever at the Panorama fair. 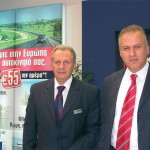