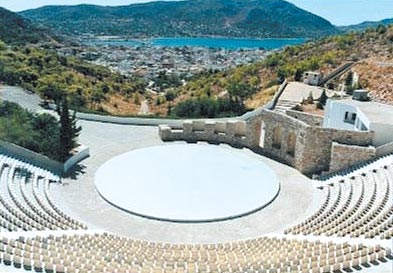 The Euripides Theater first opened on Salamina in 1993. It seats some 3,000 and hosts a variety of events throughout the year, including plays, concerts and cultural events.

The nearby island of Salamina is out to pick up a reputation as a tourism destination. Its mayor, Vangelis Agapiou, says a major campaign is now underway to entice visitors to the island. “Although I don’t expect to see many visitors from abroad, I do expect to see a substantial increase in the number of domestic visitors,” he says.

To entice domestic visitors, Mr. Agapiou has hired a specialist team, headed by long-time tourism professional, Nikos Lavrentides, to oversee a complete program that includes everything from a modern city sanitation system to the creation of a number of boutique hotels. To get the program off the drawing board, the mayor has earmarked a budget of 2.8 million euros.

He said the boutique hotels, of between 15 to rooms, could be created in cooperation with the private sector.

As well, he said there were plans to create a “tourism train route” that would take visitors to the various sites on the island – archaeological sites, the island’s outdoor theater, monuments – and then on to areas of ecological interests, beaches and historical sites.

To get the actual tourism promotion program off to a good start, Mr. Laventides has created a “Discover Salamina” brochure that includes four island tours. “Prices for the tours are priced almost at cost,” he said.