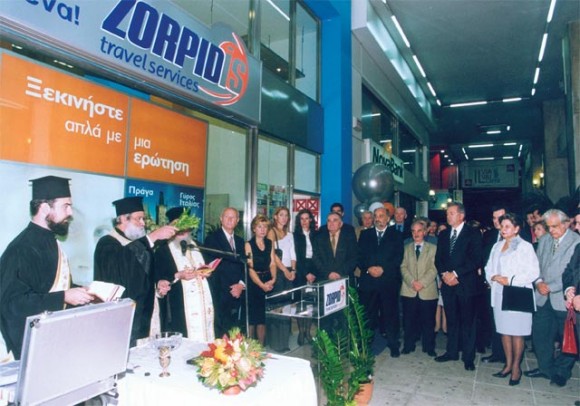 For anyone walking into the new downtown Athens offices of Zorpidis Travel Services it’s difficult to imagine that there’s a tourism crisis. Besides bustling with activity, the office permeates a feeling of success. It will be hardly surprising to see the office expanded within a short period.

Although the Zorpidis brothers, Michael and George, have had an office in Athens for the past 15 years, it was but an extension of the Thessaloniki office, which is the biggest and busiest in Northern Greece with eight branch offices. But with the success of the Olympic Games -a good number of the company’s 120 tour coaches (the biggest fleet in the country) were used during the Games- it was time to expand and become the biggest and busiest in the Attica region as well.

Angela Tsaila, office manager for the Athens office, says this is a major travel office with all services available to the walk-in customer. “We expect a lot of walk-in traffic for airline tickets and, of course, for one of our plethora of package holidays, which are more than just special.”

She explains that the most popular packages are those to Paris, Prague and Istanbul, but not just because of the competitive prices. “Each has a weekly guaranteed departure and each is met by Zorpidis employees stationed at each destination, and our customers are transported with coaches owned and serviced by Zorpidis,” she says.

Ms. Tsaila believes the next step in the company’s expansion plans is to create additional partnership agreements with selected travel agents throughout Attica and Peloponnessos, as well as Crete and the other major Greek Islands.

The Zorpidis Travel Group was founded 30 years ago. The company was quick to invest in travel coaches as a way to ensure high quality service and worked especially hard to cement strong relationships with partner associates throughout Greece and Europe.

Besides tour packages, which include Thessaloniki City Tours and tours to Meteora and Vergina, the company has specialized departments for conferences, business travel, yachting and cruises, special interest travel, VIP travel and youth travel. Everyday services include ticketing and hotel reservations.

The group employs more than 200 experienced staff and expects to post total revenue of some 32 million euros next year. Overall expansion plans include coach fleet renewal, on-line hookup with all cooperating travel offices, lodgings and the founding of an airline.