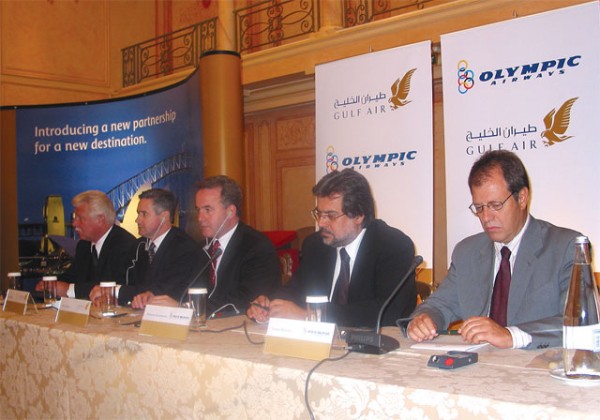 Flights to Australia from Greece are to start again from November 23, nearly a year after they were suspended, thanks to a deal between Olympic Airways and Gulf Air, the managing directors of the two carriers announced in early September.

The daily Athens-Sydney flights will stop over in Bahrain and will be conducted by Gulf Air airbuses, they said. They added that the crew on all flights will include Greek-speaking staff and that the prices will be competitive. OA decided to cut its Athens-Australia service last November due to a heavy loss of bookings on the route.

At the press conference to announce the agreement were (from left in the above photo): Gulf Air’s Luke Medley, John Butler and James Hogan -the carrier’s president and chief executive officer- with Olympic Airways’ head, Dionysis Kalophonos and the airline’s Costas Mavrikis.