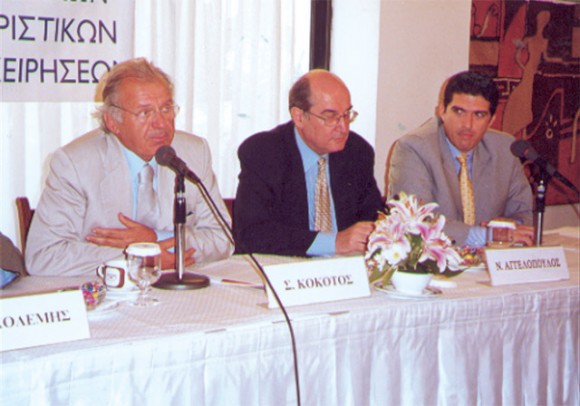 Spiros Kokotos, president of the Association of Greek Tourism Enterprises (SETE), called the tourism press corps together last month to reiterate industry complaints that the government was not doing its best to confront tourism problems.

He said that the state education system was not up to the required standards and thus the entire tourism sector lacked qualified professionals, and that the hotel sector in particular was forced to look outside Greek borders for qualified personnel. This was also a reason why the government’s suggested star system, which requires a specific number of qualified personnel per category, had yet to see the light of day, he said. He also said the annual, state-funded advertising campaign for the tourism sector is too little too late. He and his board members said that that was one reason why arrivals this year most likely would be less that last year.

To confront tourism arrival drops and losses, Mr. Kokotos said his association had proposed the formation of a company that would deal exclusively with marketing and advertising with the participation of state bodies, but as yet no government response has been forthcoming.

A second proposal concerned the setting up of a firm to run quality checks on all aspects of the sector. “Furthermore, the 2004 Games present a great challenge and the industry’s ability or provide value for money will affect it for many years to come,” said Mr. Kokotos.

Referring to the 2000 tourist season, the association’s vice president, Nikos Angelopoulos, said “Greece should be happy if it achieves an arrivals figure close to that of last year” as competitors such as Egypt and Turkey were not facing problems that saw significant numbers of travellers choose Greece.

“We should not focus on arrivals so much as the average length of stay,” he said, noting that the latter has dropped from 14 to 10 days.

The association’s general secretary, Stelios Golemis, said that the organization was deeply concerned over state- owned Olympic Airways, “not because of what is happening but what is not happening,” he said.

Last month, British Airways’ subsidiary, Speedwing, put an end to its 11-month-long effort to return the Greek airline to profitability and declined to take up an option to purchase up to 20% of the company.

Words were also spent on the new Athens international airport at Spata. The association doubts it will open as planned on March 2001 because there will be no easy roard or rail acess to it from downtown Athens.

Another problem, said the association, is that it would have among the highest operating costs of any European airport.

Such a large facility was created in order for Greece to become the next major air transport hub instead of airports at Istanbul or Rome who are hot contenders, as central Europe cannot extend its airports further.