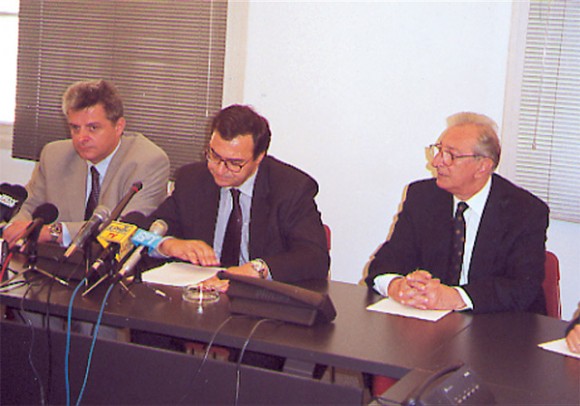 A package of measures aimed at increasing the level of tourism services offered in Greece was announced recently by Development Minister Nikos Christodoulakis. The package, called “Tourism Readiness 2000″, is seen as a positive measure and one that provides tourists with some knowledge so as to confront problems, such as overcharging. For example, restaurant owners will be asked to post outside their establishments their menus complete with prices.

As well, the national tourism organization and the development ministry will publish an information pamphlet on Greece in four languages  (Greek, English, German and French). The pamphlet will include basic information on Greece, basic tourism services, average prices for some services and useful telephone numbers. It should be available before the end of July.

Within the pamphlet, emphasis will be placed on the help available from the country’s tourist information  “hotline” 171, which is a direct line from anywhere in Greece. Earlier this year, the service was upgraded to include the electronic system Estia, which is a database of tourism information and advice for tourists. The hotline runs on a 24- hour basic, seven days a week, during the tourism season.

Mr. Christodoulakis also announced the formation of a national tourism task force as part of the readiness package. The 140- member task force includes regional teams that will check the quality of services provided by Greek tourism enterprises.

During the same press call, the minister refused to make predictions on arrivals figures for the tourist season, but he did point to a general sence of optimism from first four- month date that indicated a rise in arrivals.

“I have a feeling it will go well but it is better to wait until the end of the season when we’ll have tangible results,” said Mr. Christodoulakis. “To say now that the year will go well might have a negative effect in that potential visitors may read this and say ‘many people are going to Greece for their holidays this summer, let’s wailt till later.”

We shouldn’t limit ourselves to figures, he added. “ What is important thought is how we work to achieve the most out of the season, and I don’t believe we should limit it to the summer months. Our aim is to inprove services available to tourists then towards the end of the year record the results, not only in quantitative but in qualitative terms.”

The minister then underlined the difficulties encountered by the tourism industry as it forms part of the service sector.

He said problems are bound to occur because tourism cannot be sold on shelves. “Every visitor experiences [Greece] differently, many factors are involved. We aim to meet the basic needs of the average tourist,” he stated.

“The ministry intends making use of relevant mechanisms and to consult with members of the industry in order to deal with any difficulties.”

EU Approves Proposal To Include Tourism In Constitution Revision