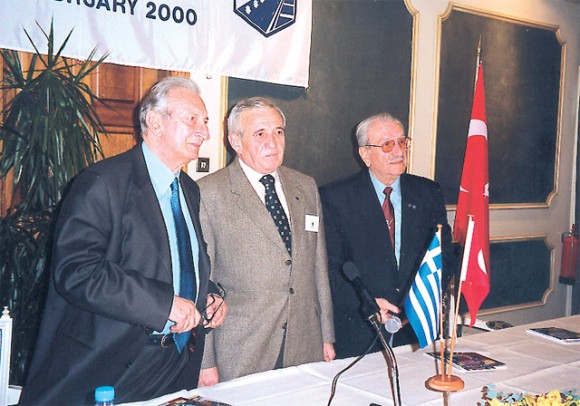 Members of Greek and Turkish Skal clubs got together in Athens last month to agree on ways in which they can cooperate in the tourism sector.  All agreed that “we need peace in the Aegean and for this we need tourism.” They suggested the entire Aegean  area be promoted as a tourism destination that includes not only Greece and Turkey but also Israel and Egypt.

Skal Club Athens President Yiannis Stefanides, who is also the president of the Hellenic Tourism Organization, said that both countries have much in common as far as tourism is concerned. He felt that together Greece and Turkey could develop cooperation agreements in the realm of both tourism business and education that can be of benefit to both countries. Already, Greek and Turkish firms have agreed in principle to work together to promote yachting in the region, according to a report in the Turkish daily Hurriyet. The Turkish company Setour Marina, which belongs to the Kotz group, now cooperates with Greek yachting interests in joint efforts to encourage yacht owners in the Mediterranean to sail in Greek and Turkish waters.

As well, together with Greek yachting enterprises, preparations are underway to stage a Greek-Turkish sailing competition in the Aegean. It will begin at Istanbul and run the length of Turkey’s coastline. Setour Marina, which runs seven marinas in Turkey, says it plans to build and operate marinas in other European countries.

Skal, with more than 35,000 members in 600 clubs around the world, is an international association that aims to bring together all branches of the travel and tourism industry in a friendly environment. While it is not a business association or a forum to conduct business, Skal does encourage its members to do business with one another.