An archaeological park consisting of 530 ancient burial tombs has opened to the public in Aigai, the ancient kingdom located near the modern town of Vergina in Imathia, northern Greece.

The ancient necropolis includes the royal burial cluster of the Temenids, which consists of 21 tombs dating from the 6th to the 3rd century BC.

“We must pass on to the next generations – with the principles of sustainability… our monuments and cultural heritage that are directly connected to our national identity,” Culture Minister Lina Mendoni said during the site’s recent inauguration.

The park was created by the Imathia Ephorate of Antiquities under Central Macedonia’s regional operational program for the “protection and promotion of the cemetery of tumuli and the royal burial cluster of the Temenids (2012-2015)”.

A total of 7,500 local trees have been planted in the archaeological park, while protection canopies have been placed on tombs and in the oldest part of the royal burial cluster.

“Greece must invest in culture. Our tourism product can become competitive only through culture interventions,” Mendoni added.

Aigai has been declared a UNESCO World Heritage site. 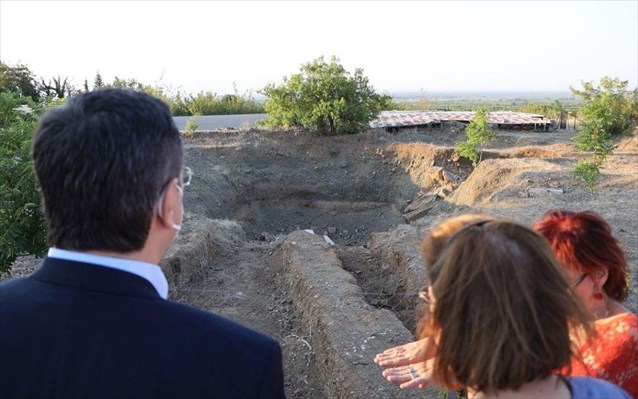 Also present at the event was Central Macedonia Governor Apostolos Tzitzikostas who highlighted the need to support culture as a pillar for the development of Greece’s economy.

“It is our obligation and duty to support archaeological work and the culture of our country,” he said also adding that over 45 million euros have been allocated for cultural projects during the last 13 years.

During her visit to Imathia, Lina Mendoni also visited the church of Agios Dimitrios Palatitsion. Built in the 16th century the church is located at the easternmost point of the Aigai necropolis. It was restored during 2017-2019 and has now reopened its doors to the public.

Mendoni and Tzitzikoastas also visited the new Polycentric Museum of Aigai that is under construction and will open its doors in 2022.