The eastern site of the excavated site in Tenea with residential remnants. Photo Source: Ministry of Culture

Archaeologists carrying out excavation works at the site of Ancient Tenea, in Corinthia, in the Southern Peloponnese, have uncovered seven new graves, four of which date back to Roman times, as well as rings, golden coins and skeletal remains which suggest the existence of a city, the Greek culture ministry announced this week. 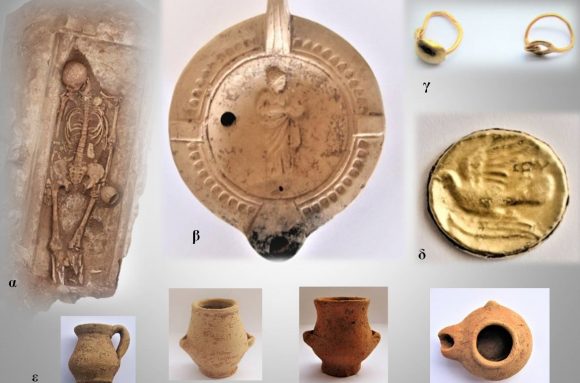 Works – carried out between September 1 and October 10 – focused on two main sites: the area of a cemetery dating to Hellenistic and Roman times with adjoining buildings and installations, and the grounds where residential remnants of Ancient Tenea were found for the first time”, the ministry said in a statement.

The ministry goes on to note that the latter findings offer evidence of the existence of the ancient city of Tenea, which has only been documented in historical sources and scholarly testimonies. Excavations began in 2013 in the village of Chiliomodi. 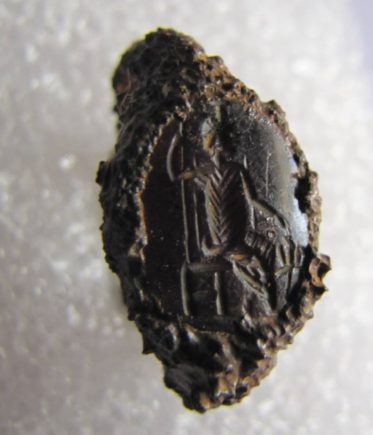 Heading the excavation, Elena Korka told the Associated Press that Ancient Tenea must have been located on a main trade route between the cities of Corinth and Argos in the northern Peloponnese, and that the finds suggest remarkable affluence.

According to the ministry, “among the finds is a ring bearing a seal (photo) with a representation of [Graeco-Egyptian deity] Sarapis sitting on a throne and near him [the hound of Hades] Kerberos in his traditional representation with three heads; a lamp featuring Hygeia, [one of the Aeclepiadae],” and a number of ancient coins.

“The richness and diversity of the finds demonstrates the long-standing prosperity of the city and its inhabitants,” the culture ministry said, adding that “all of this year’s excavations have led us to the hypothesis that the settlement may have suffered the consequences of the raid of Alaricus in the Peloponnese in 396-397 AD”.