The highly anticipated expansion and overhaul of the Makedonia Airport in Thessaloniki is set to be completed in two years’ time with a budget of 100 million euros, German airport operator Fraport said this week during a special event marking the foundation of the airport’s new terminal. 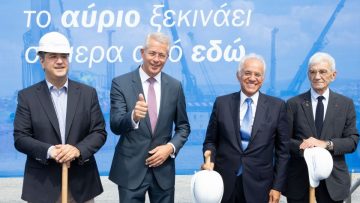 The project, to be carried out by Greek construction firm Intrakat, will create jobs for 1,000 people and once completed the airport will employ 4,000, according to Fraport Greece shareholder and head of Copelouzos Group, Dimitris Copelouzos.

“The future of Thessaloniki starts from Makedonia Airport, which aims to become the company’s flagship once works to the terminal and trade space are completed,” said Fraport CEO Stefan Schulte.

“The new airport will be a cornerstone of development in the wider Balkan region and not just for Greece,” said Fraport Greece CEO Alexander Zinell, after presenting plans for the airport upgrade at the event, adding that the company aims through its far-reaching policies to increase the number of airlines operating out of Makedonia, which will in turn attract visitors and boost the local economy.

The company is planning among others to increase airport capacity, improve the quality of services, increase the number of check-in stations by 47 percent, baggage claim areas by 75 percent, the total number of gates by 50 percent as well as double security zones.