The European Union on Thursday announced the finalists in its new competition recognising European cities with outstanding achievements in smart tourism.

The new EU initiative aims to promote smart tourism in the EU, foster innovative, sustainable and inclusive tourism development, as well as spread and facilitate the exchange of best practices.

In the first stage of the competition, an independent panel of experts evaluated applications from 38 cities from 19 EU Member States. 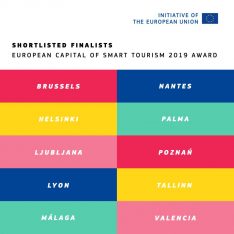 In the second stage of the competition, a European jury will judge the presentations of the ten finalist cities and will select the two winners that will hold the title of the European Capital of Smart Tourism 2019.

The two winning cities will benefit from communication and branding support for a year, a promotional video, a purpose-built sculpture for their city centres, and bespoke promotional actions.

Four additional cities will receive European Smart Tourism Awards for their outstanding achievements in the four categories of the competition (sustainability, accessibility, digitalisation and cultural heritage and creativity).

All winning cities will be honored at an award ceremony on the occasion of European Tourism Day in Brussels on November 7.