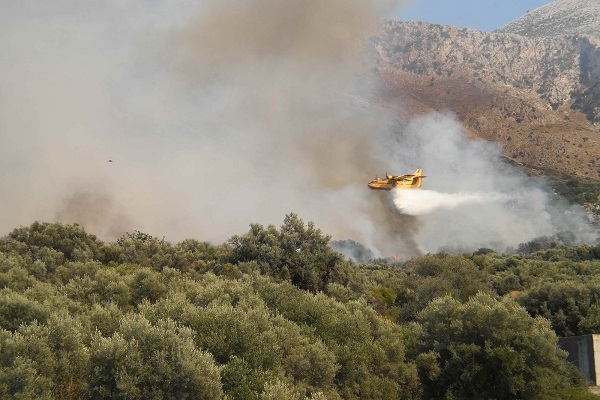 Firefighters continued their efforts into Monday morning (August 13) to bring under control two wildfires that broke out on the island of Evia on Sunday, with the commander of the Evia Fire Brigade Vangelis Palios telling the Athens News Agency that there were no active fronts and that the fire would be completely extinguished by noon.

In the meantime, Central Greece Regional Governor Kostas Bakoyannis declared the Dirfys-Messapia Municipality in a state of emergency.

More than 186 firefighters with 62 firefighting vehicles, air craft and helicopters were stationed in the region on Sunday, while some 500 people from the nearby villages of Kontodespoti and Stavros were evacuated as a precaution.

“Fewer than 140 people were accommodated at hotels after being transferred by buses, as other families preferred to stay with friends,” said Thanasis Karakantzas, director of the Central Greece Civil Protection authority.

The blaze that broke out in central Evia, some 92km north of Athens, comes weeks after one of the deadliest fires in Greek history on July 23 that ravaged the coastal resort town of Mati, leaving at least 94 people dead and dozens missing.

The General Secretariat for Civil Protection of the Greek Ministry of Interior has warned that on Monday, August 13, the risk of wildfires in the regions of Attica and Central Greece (Evia) will be very high (category 4 for fire risk).

In the event of a fire, citizens are requested to immediately notify the Greek Fire Service on telephone number 199.