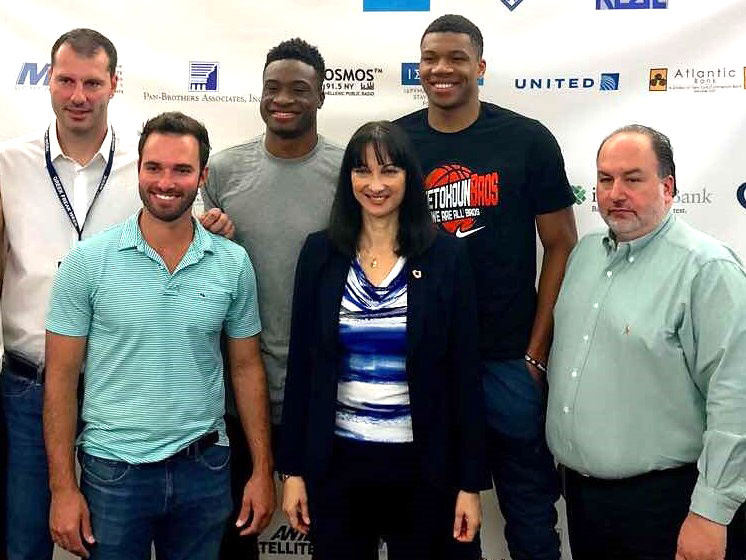 Sports and culture bring people together and pave the way for cooperation, said Minister Kountoura, who was in New York for an event marking 30 years since Greece won the European basketball championship in 1987 organized by CosmosFM.

The Antetokounmpo brothers expressed their love for Greece and said they would be proud to become tourism ambassadors and to champion Greece worldwide.

Kountoura awarded Giannis Antetokounmpo with the Greek Heritage Award for promoting Greece with passion at every chance.

NBA star Giannis Antetokounmpo (Milwaukee Bucks) became one of the country’s best tourism ‘marketeers’ achieving with every stellar slam dunk at the 66th NBA All-Star Game to send US travelers flocking to Greece. Known as the “Greek Freak”, the 22-year-old Greek-Nigerian All-Star Antetokounmpo has repeatedly posted photos of Greece and the Greek flag on his social media saying he would prefer an international medal to an NBA MVP award or title “because it will stay forever in Greece”.

Thanasis Antetokounmpo is currently playing for MoraBanc Andorra of the Liga ACB.

Basketball stars Panagiotis Fasoulas, a FIBA Hall of Fame member and Michalis Kakiouzis were also awarded during the event.

Aegean: Passenger Traffic Up 8% in April-May

Economist Summit: Greece Can Grow Financially Strong in Next Decade