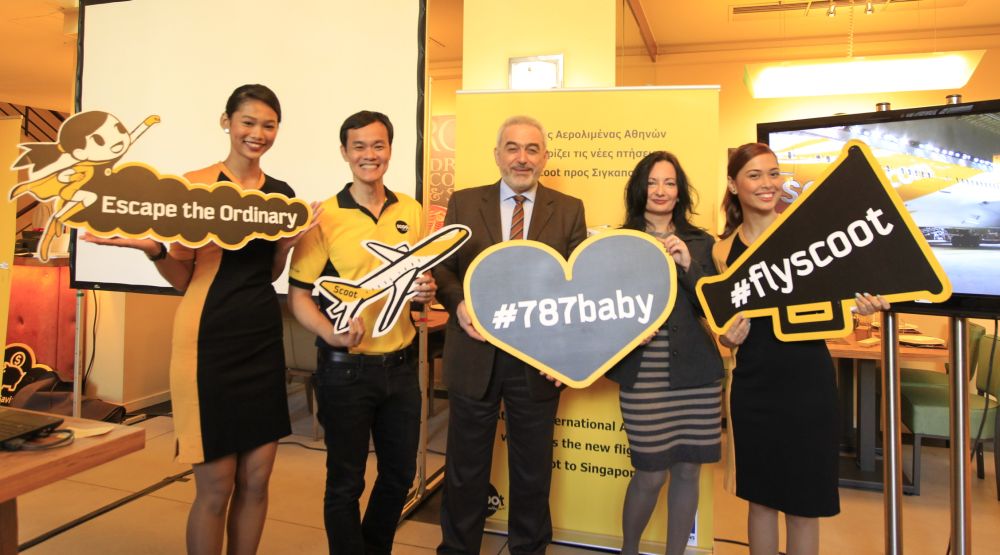 Scoot, a wholly-owned subsidiary of the Singapore Airlines Group managed by Budget Aviation Holdings (BAH), will expand into Europe from June 20, with four flights a week between Singapore and Athens.

“Singapore to Athens had been an established flight route in the past, but it has not been operated on a scheduled basis for some time now… It is a good spot for us to fill and help the group expand its overall network”, Lee Lik Hsin, Chief Executive Officer, BAH, said during a media briefing in Athens on Wednesday. “We, as a budget airline, feel that we are able to operate this route profitably and on a sustained basis, with year round scheduled services.”

TZ702, Singapore-Athens, is scheduled to depart at 0200hrs on Tuesdays, Thursdays, Saturdays and Sundays, arriving in Athens at 0830hrs. TZ701, Athens-Singapore, takes off at 1200hrs, arriving in Singapore at 0425hrs the next day. All times are local.

According to BAH’s CEO, the great value offered through Scoot’s air fares will provide a “significant game changing product” for customers in the Greek market, as well as for customers in Asia coming to Greece. 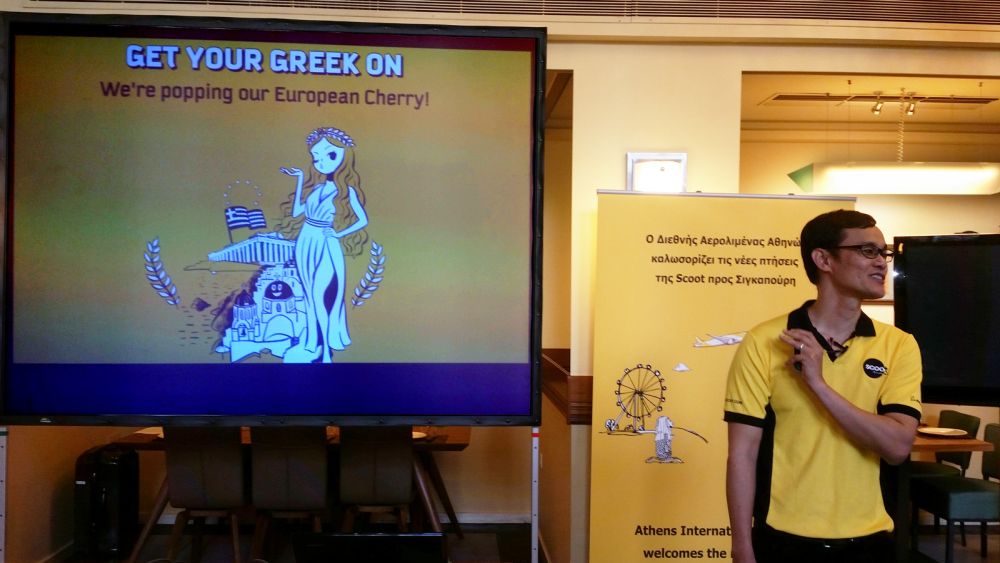 Scoot’s ad announcing that Athens is the airline’s very first destination in Europe. “We like to think of ourselves as fun and differentiate from other airlines that are out there”, Lee Lik Hsin, Chief Executive Officer, BAH, told Greek journalists while giving some examples of Scoot’s marketing approach.

“The landmark decision for Scoot to have Athens as the entry point to grow the European market is in line with the Group’s strategic move to stimulate passenger traffic between Asia Pacific and Europe, while boosting connectivity through the Singapore hub”, he said. “This is made possible with Scoot’s integration with sister airline Tigerair, the Group’s short-haul, low-cost arm also managed by BAH, last May.”

The Singapore-Athens route will be served by Scoot’s brand-new Boeing 787-8 Dreamliners, which are fitted with eight crew bunks and a total of 329 seats, including 18 in ScootBiz.

Longest ever flight operated by an LCC 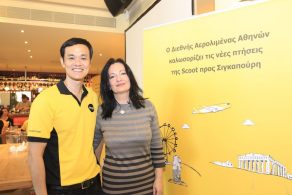 Lee Lik Hsin, CEO of BAH and Ioanna Papadopoulou, Director of Communications and Marketing of AIA.

“We are delighted with Scoot’s decision to connect Singapore to Athens, on the longest ever flight operated by an LCC“, said Yiannis Paraschis, the CEO of AIA, adding that the “remarkable development” establishes Athens as the European gateway for the carrier’s low cost flights from/to the Asia-Pacific region.

“We warmly welcome Scoot, which continues the long history of the Singapore Airlines family at Athens, and wish our new airline partner all the best for a highly significant route that enhances Athens’ connectivity”, Paraschis said.

Scoot’s guests from Athens and Europe will fly from Athens International Airport (AIA) to Changi Airport in Singapore, and from there, onward to popular Asia-Pacific destinations including cosmopolitan cities in Australia, China, India, Japan, Korea, Taiwan, Thailand and Saudi Arabia. Scoot’s guests can also connect to Tigerair’s network spanning 39 cities from Singapore.

To celebrate the launch, Scoot is offering attractive one-way fares from Athens to Singapore, Australia and selected Southeast Asian destinations from as low as 180 euros on Economy and 590 euros on ScootBiz. Promotion starts now and will end by 11.59pm on March 31.

European Commission Outlines 5 Scenarios for Future of the EU