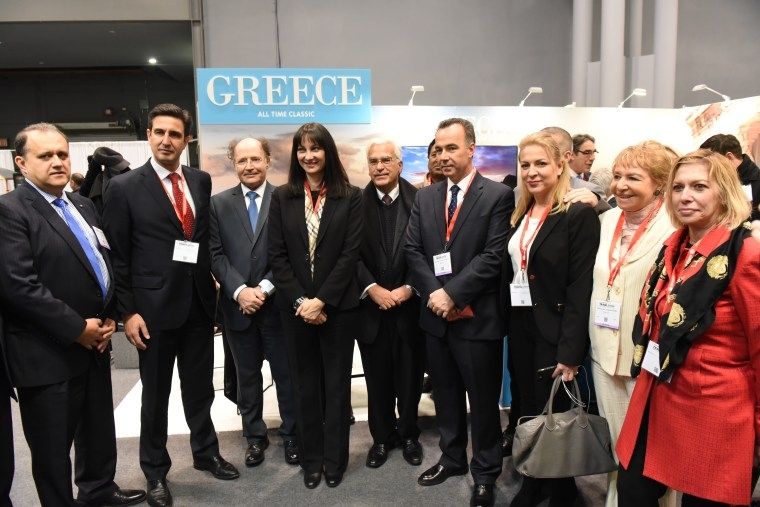 Greece is expecting more tourists from the United States this year, following a double-digit increase of American visitors during the 2015-2016 period, Greek Tourism Minister Elena Kountoura said during her recent visit in the US to attend the New York Times Travel Show.

Organized by New York Times newspaper, the NYT Travel Show is considered one of the top travel fairs with more than 500 exhibitors from 150 countries and an average of 29,000 visitors. The 2017 show took place January 27-29 at the Jacob K. Javits Convention Center in New York.

While giving a speech at a special event held in honor of Greece at the European Stage, Minister Kountoura presented Greece as a global attractive destination for tourism all 365 days of the year and invited American travelers to experience the country.

The Greek tourism minister had a full agenda while at the NYT Travel Show, including meetings with leading US tour operators and travel agencies. Accompanied by the secretary general of the Greek National Tourism Organization, Dimitris Tryfonopoulos, Kountoura’s discussions with American travel professionals focused on boosting travel packages to Greece for the 2017 and 2018 seasons.

The tourism minister also attended a meeting with the president of the Federation of Hellenic Societies of Greater NY, Petros Galatoulas, at the Stathakion Cultural Center in Astoria. Kountoura informed Galatoulas on the ministry’s strategy for opening to the US travel market with targeted actions and highlighted the significant increase in American visitors to Greece over the last two years, as a result of coordinated efforts and the strengthening of direct flights between Greece and the US. Moreover, while in New York, the minister gave interviews to the National Herald and to the Greek radio stations for the Diaspora, Hellas and Cosmos.

Minister Kountoura’s next stop in the United States will be Chicago where she has a series of scheduled meetings with leading tour operators and travel agents. Her trip to the US is included within the ministry’s strategy to boost the promotion of Greece across America.