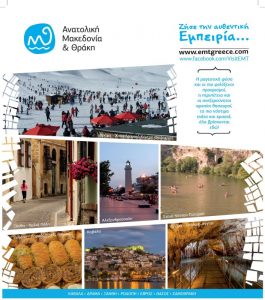 Tourism to the region of Eastern Macedonia – Thrace is expected to pick up pace in the coming year, with regional authorities citing increased pre-bookings as well as the addition of new airline routes to the Megas Alexandros Airport in Kavala.

Indicatively, in the summer months of 2016 the Kavala airport recorded a 6.5 percent rise in the number of arrivals for a second year compared to 2015. At the same time, regional authorities have been pushing alternative tourism options including the Via Egnatia trekking path and religious route “On the Path of Apostle Paul”.

Meanwhile, according to the region’s data, the number of arrivals from Germany increased by 16.84 percent and from the UK by 37.32 percent in the summer months of the year. Holidaymakers from Romania, Turkey, Serbia and Bulgaria preferred to visit the region by road.

Eastern Macedonia – Thrace Region authorities are attributing the improved performance to an ongoing promotional strategy which included this year reaching out to Balkan neighbors and Western European markets.

The Eastern Macedonia – Thrace Region includes the cities of Drama, Evros, Kavala, Rhodope and Xanthi and the islands of Thassos and Samothrace.