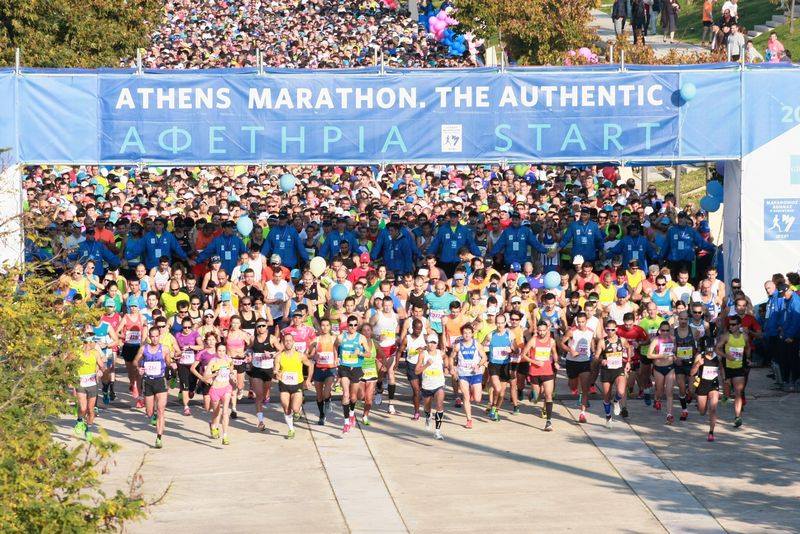 The 34th “Athens Marathon. The Authentic”, to take place this year on November 13, marks 120 years from the ﬁrst contemporary Marathon race, an athletic event inspired by the ancient course of the legendary Athenian hoplite hemerodromos (courier in Ancient Greece who would run for a day) after the Battle of Marathon.

In the spring of 1896, during the ﬁrst modern Olympics, athletes from ﬁve countries lined up at the starting line on the bridge of Marathon in order to cover the distance to the Panathenaic Stadium on a dirtpath.

The race was won by Greek athlete Spyros Louis, whose historic victory stands as a symbol of tireless efort, stamina as well as the breaking of physical and mental barriers. Key to the race was also the presence of Greek runner Charilaos Vasilakos, who won the second place. Louis and Vasilakos, the two Greek runners, became the ﬁrst two Olympic victors in the history of the Marathon race. This race, which was launched during the inaugural Olympic Games of the modern era, became one of the most popular athletic events all over the world, with millions of participants and supporters.

This year also marks 70 years from 1946, when leading Greek runner Stelios Kyriakides won the Boston Marathon, achieving one of the major Greek athletic successes internationally, while also demonstrating humanity and great love for his country.

The Athens Marathon, the only race conducted along the original course from Marathon to Athens and the Panathenaic Stadium, remains an emblematic event for all longdistance aﬁcionados. In its present form it is held continuously from 1983 on, dedicated to Grigoris Lambrakis, the great Greek doctor, champion in the Balkan Athletic Games and paciﬁst.

Last year, a record number of 16,000 runners went to the start line of the original marathon race at the coastal town of Marathon, marking a rise of almost 25 percent from 2014. Organizer Hellenic Athletics Federation (SEGAS), recorded a total of 43,000 entries for the classic race and the shorter distance events, held the same day. In 2015 and for the ﬁrst time since 2000, the Athens Marathon had a Greek men’s winner: Christoforos Merousis.

This year, SEGAS is expecting more than 50,000 sports lovers of all ages to participate in the country’s largest annual sporting event.