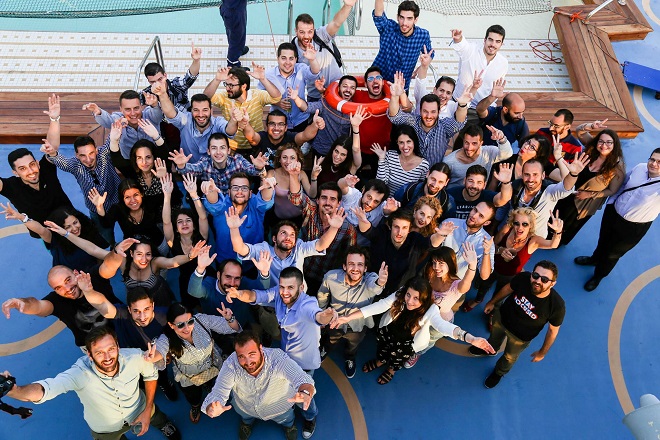 Participants of the CruiseInn contest in May on the Celestyal Olympia.

Celestyal Cruises taps into talent with ‘CruiseInn’ onboard innovation contests

CruiseInn is about sharing ideas and launching innovative and disruptive startups within industries that support the Greek economy. It is organised by ThinkBiz, the first student entrepreneurship club in Greece.

Following the May 16-20 CruiseInn on board the Celestyal Olympia, which focused on culture, a second four-day cruise to run on October 17-21 invites competitors to focus their talents on food, drink and eno-gastronomy. The two initiatives support youth innovation and focus on the key areas of Celestyal Cruises’ expansion policy: culture and gastronomy.

“We are happy because for the second consecutive year Celestyal Cruises is hosting this brilliant entrepreneurial initiative and providing support to young people with drive, enthusiasm and ideas,” Kyriakos Anastassiadis, CEO of Celestyal Cruises, said in an announcement.

“We hope these cruises will help them get started in successful careers in shipping and tourism,” he added.

In each cruise, 30 hand-picked engineering, programming, design, business and marketing recent graduates or students form teams to create new startup projects. In each stop, CruiseInn participants will connect with the local innovation ecosystems, while the best three startups will be rewarded with prizes.

“Customer Hero” one of the winner teams of the competition with Experiential Marketing Manager of Celestyal Cruises, Dimitra Vlachou.

Ryde, Customer Hero and Vessel Hero were the winning teams in the first competition, with Ryde clinching the 3,500-euro main prize and a pledge that its ideas will take shape through Celestyal Cruises’ business development services. Customer Hero, meanwhile, won a three-day cruise for each of its members and the team’s idea is already being implemented on Celestyal’s liners.

The company also won the “Cruise Line Revelation” Award at the Excellence Awards in Spain, and was a finalist in the “Continuous Enrichment, On Board and Ashore” category at London’s WAVE Awards.