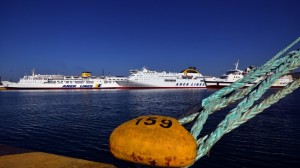 Ferry boats in Greece will not be in service from 6am on Wednesday, January 20, until 6am on Friday, January 22, as the Pan-Hellenic Seamen’s Federation (PNO) has announced a 48-hour strike.

PNO is protesting the social security reform bill which see all funds that insure workers in the shipping and maritime transport sectors merged into one national insurance body named EFKA.

According to reports, the announced strike may be the beginning of a rolling programme of industrial action.