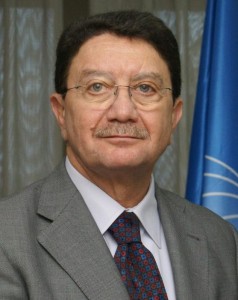 Diversifying is key to the Greek tourism sector’s growth, Taleb Rifai, Secretary-General of the United Nations’ World Tourism Organization (UNWTO), said in a recent interview to Greek daily To Vima.

The chief of the Madrid-based UNWTO said he was anticipating a positive year ahead for Greece, adding that through diversification, the Greek tourism sector can play an active role in the world tourism scene.

“Greece has shown excellent results in international tourist arrivals in the last three years. Following an increase of around 15 percent and 23 percent in 2013 and 2014 respectively, figures for 2015 indicate that the country has the potential to strengthen these results with further double-digit growth. More importantly, tourism has been fundamental in supporting the Greek economy. For example, the sector’s contribution to the balance of payments reached 13.4 billion euros in 2014,” Mr Taleb said.

The UNWTO head noted that he does not believe the ongoing refugee crisis will have an impact on Greek tourism but went on to describe it as “a humanitarian crisis and a tragedy without precedent, with implications in many countries”.

He stressed that it was a “global challenge”, that requires “a global response and a single action”.

Referring to the challenges ahead, particularly for Mediterranean countries, Mr Rifai said they face the issue of seasonality and the need to diversify products and markets.

“In the case of Greece, the country has proven to be mature enough to become a reference point in relation to the world tourism. The positive perceptions produced have been built through hard work in tourism,” he said.

Mr Rifai went on to suggest the creation of new products and reaching out to new market segments, such as older travelers and millennials, as well as involving the private sector in the development of special low-season package tours, but also in the promotion of niche markets, such as conference tourism.

“Greece is a highly diverse country with much to offer visitors: culture, history, traditions, gastronomy, adventure and sports. In this context, the tourism sector can easily create new products and increase the interest of young people,” he added.

On a final note, Mr Rifai said that accessibility, tapping into talent and innovation and offering experiential travel options can go a long way towards establishing Greece as a primary tourism destination with a bright future.