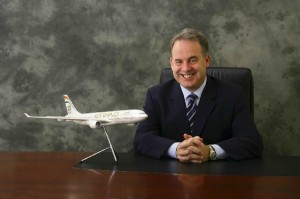 James Hogan, President and Chief Executive Officer of Etihad Airways, the national airline of the United Arab Emirates, was recently recognized as one of the 25 most influential business travel executives by Business Travel News (BTN), the premier industry publication for corporate travel news. The 2015 list of industry honorees was announced last week at The BTN Group’s Business Travel Trends & Forecasts conference in New York City.

Ms West said that the completion of Etihad’s purchase of a 49 percent stake in Alitalia last December underscored Hogan’s dedication to a bold equity alliance strategy.

“This, along with his continued effort to place downward pressure on long-haul airfares, have earned him a spot on our annual list”, she added.

Mr. Hogan was appointed President and Chief Executive of Etihad Airways in September 2006 and has more than 30 years of travel industry expertise. He has since overseen the rapid growth of the airline, which included the launch of six new routes on three continents during 2015, taking its global network of destinations to 116 with a fleet of 120 aircraft with more than 200 aircraft on firm order. The airline operates an expanding network of passenger and cargo destinations in the Middle East, Africa, Europe, Asia, Australia and the Americas.