The country’s privatization fund, known as TAIPED (Hellenic Republic Asset and Development Fund), is examining the creation of a metropolitan waterway at Agios Kosmas, southern Attica, in efforts to boost tourism to the Greek capital, Attica’s coasts and island seaside towns.

Meanwhile, two Greek companies — Hellenic Seaplanes and Water Airports — are already moving ahead with plans to construct waterway networks across the country but insiders warn that political uncertainty and red tape will most likely postpone the first flights for next summer.

According to Hellenic Seaplanes Vice President and GM Mihalis Assariotis, Agios Kosmas is an ideal location as sailing facilities are already in place and suitable for hydroplanes. On the downside, he mentions the lack of metro services. His company had proposed the creation of a hub near the Peace and Friendship Stadium (SEF) in Neo Faliro near the port of Piraeus, budgeted at 26 million euros.

Hellenic Seaplanes already holds a licence for a waterway on the island of Corfu, and is pushing the procedure for 20 more waterways across the country as well as for private waterways to cater to the needs of hotels and private individuals, and has added lakes to its planned network. 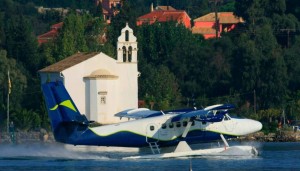 According to TAIPED officials, licences issued by the Port Authority will provide a significant added value to their holders, increasing the value of their assets.

Water Airports also agrees with the Agios Kosmas location, which Tasos Govas, the company president, describes as convenient and at a strategic point. The company is also moving ahead with its Corfu investment, awaiting in the meantime permits for a number of waterways in several other parts of the country.

Both companies are however pointing to the loss of this year’s tourist season due to delays in the licensing procedures.

If the Agios Kosmas plan does go through, the waterway will connect the islands with charter flights, air taxis, touring flights in cooperation with cruise companies, special flights towards tourist interest coastal locations and sites, daily routes to select islands in the Aegean, special delivery flights and emergency flights including hospital transport, search and rescue, fire prevention.